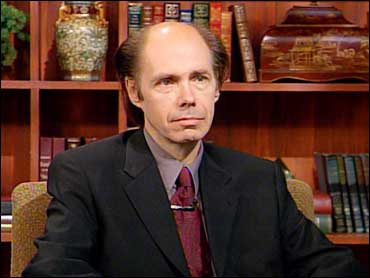 Fans of best-selling mystery writer Jeffery Deaver are in for another thrill ride.

His popular, quadriplegic crime fighter Lincoln Rhyme is back in a seventh book in the new novel, "The Cold Moon." In it, Rhyme and partner Amelia Sacks are in a race against time to catch a serial killer who's known as "The Watch Maker," because he always leaves a clock with the body of the victim.

Rhyme is a forensic criminologist who, despite being severely disabled, always manages to track down the serial killer on the loose, with the help of his partner and beautiful, longtime girlfriend, Det. Amelia Sachs. She is his eyes, ears and legs on the street.

On The Early Show Tuesday, Deaver told co-anchor Rene Syler he introduces a new character in "The Cold Moon" who will be the subject of a new series. She is a specialist in kinesics, or the study of body language.

The versatile and prolific Deaver said he turns out a new book about every eight months, on average.

That's fine by Rhyme fans, he observed, saying: "They love Lincoln Rhyme. He's a very interesting character. He's a quadriplegic, and is severely disabled, and yet I have been astonished at the popularity of this man. The books are sold in 150, 200 countries, translated in about 35, 36 languages. And I have fan clubs in Albania and Japan. Actually, I don't have fan clubs — Lincoln Rhyme has fan clubs. They don't invite me. They'd like Lincoln Rhyme to come visit."

Why is the watch maker in "The Cold Moon" so important to nab?

"I love my villains, and I came up with this idea of a man who constructs his plots for murder with the care with which he'd make clocks and watches," he said. "That's his hobby in his past. He did make clocks and watches. And I thought, 'I'm going to lay — make layer upon layer upon layer of plot, of twists and turns and surprises,' and it really plays into the hand of my character, Lincoln Rhyme, because he likes to unravel the plots. I think they're a good combination, a good matched pair of protagonist and villain."

"She's an investigative agent with the California Bureau of Investigation, sort of like a mini-FBI, out in California," Deaver explained. "She happens to be in New York in 'The Cold Moon,' teaching a seminar on kinesics. Kinesics is body language. It's a fascinating subject. Law enforcers use it to determine if a subject is telling the truth or not, or actually to help witnesses, as well, if they're kind of confused about facts, confused about what they might have seen.

"And Katherine has that as her specialty. And not only does she appear in 'The Cold Moon,' but I like her so much, I'm gonna start a new series beginning next year with her, featuring her alone. Lincoln may make an appearance or two in that book, but it will be Katherine Dance's series, alternating with Lincoln Rhyme every other year."

The books take an extraordinary amount of research, Deaver said: "That's really an important part of these books, because my fans love to learn things in addition to being thrilled. So, I spend … months before I write a single word of the book doing research on kinesics or forensics or quadriplegia, in the case of Lincoln Rhyme, and at the same time, I'm outlining the book to get all those little intricate gears and springs and plot twists put together to make sure it all comes together at the end."

What else is Deaver up to? Plenty: "As a matter of fact, I'm sort of co-producing, working with a filmmaker in Germany right now. And we're doing one of my short stories, 'The Weekender.' We're doing a short film for entry into various competitions. Looking forward to doing that. And I'm trying to put together a TV show, 'Your Medium.' "

Deaver, a huge soap opera fan, was on "As the World Turns" a couple of years ago, "and it was great fun," he said. "I had lines to learn. I did stunt work. I got killed. I got killed twice. The first time, I didn't die very well, so they had to kill me again.

"Just a month ago, sort of to celebrate the 50th anniversary of 'As the World Turns,' I was on the show again. And I found my niche: I'm now what they call a 'background player.' That means an extra. All I do is stand around and not say anything and hold a glass of fake champagne!' "

To read an excerpt of "The Cold Moon", click here.

To see a biography of Jeffery Deaver, click here.