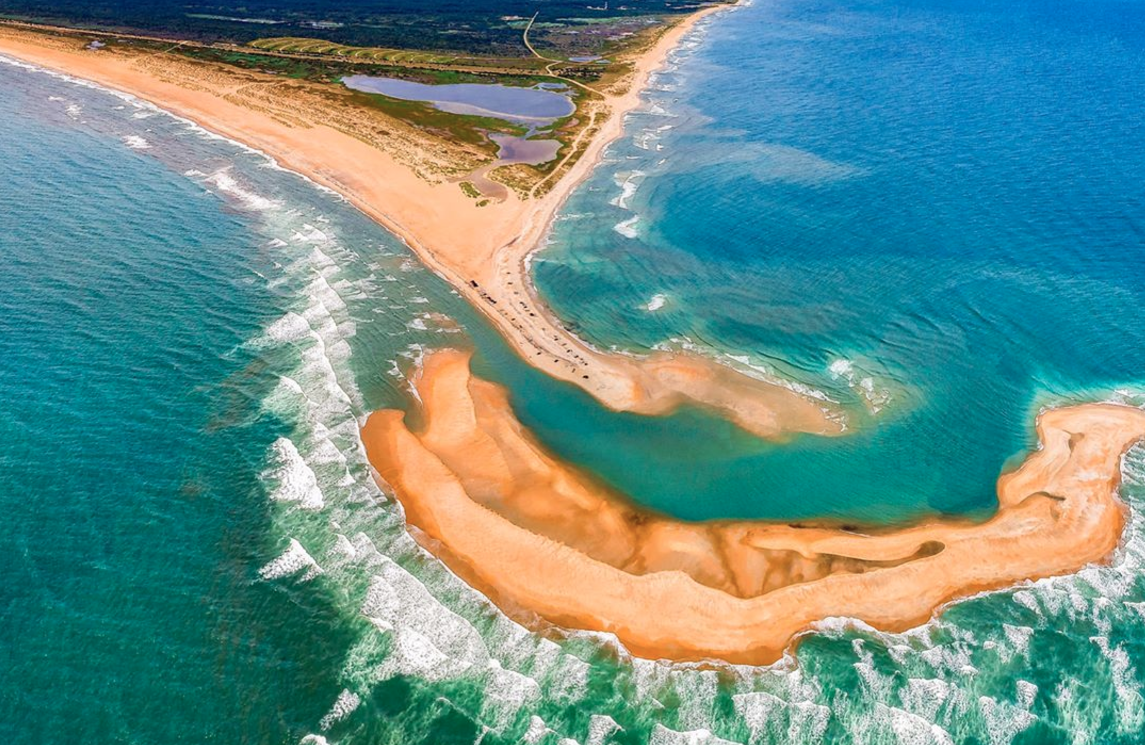 A new island has appeared off the coast of North Carolina's Cape Hatteras National Seashore, and unfortunately for locals, word is spreading -- fast.

The mile-long sandbar, dubbed "Shelly Island" for its plethora of seashells and colorful pebbles, has been forming and growing since late spring. Residents and tourists alike are starting to take notice.

Reide Corbett, a professor in the Department of Geological Sciences at East Carolina University and a scientist at UNC Coastal Studies Institute, advises people to enjoy exploring the tiny island while they still can.

"The thing about the Outer Banks -- they are pretty dynamic. [The island] is kind of neat and interesting and provides new piece of land for people to explore, but it is a dynamic environment," Reide told CBS News. "I wasn't surprised to see it, and I wouldn't be surprised to see it disappear."

Chad Koczera was one of the first people to explore the newly-formed island on May 31.

He was traveling with his fiancée from Connecticut to Cape Point, the place where they'd gotten engaged, when he stumbled upon an unfamiliar sight.

"This was our fifth time down to Hatteras. We like to return to the Point because that's the same spot I proposed," Koczera told CBS News. "We were driving to the Point after a storm to collect shells when we spotted an area we couldn't get to by car."

Confused, Koczera pulled out his drone camera to get a better look at the narrow island. When he looked at the footage, he was met with a stunning sight.

He posted photos of the sandbar on Instagram and the images soon went viral.

"I didn't think much of this until it went viral," Koczera said. "I just thought it was shifting tides."

The Outer Banks has some of the most exposed coastlines on the East Coast, Corbett explained, and currents with full streams can move a lot of sand around depending on the time of year.

"In the summer, things start to calm down and sand begins to accumulate and so you see this with sandbars," Corbett said. "This one happens to be exposed."

At this point, it's unknown whether the island is here to stay.

"Our coast is often shaped by storms, Nor'easters, and those can really change our system overnight," Corbett explained. "If I was to predict something, I'd say we'll see this likely stick around as long as we have these same calm conditions. But the first main storm that comes around, we'll likely see a change in that bar -- that island."

As curiosity about Shelly Island draws visitors this summer, Corbett urges caution against trying to swim there.

Instead, he suggests using a boat, kayak or paddle board to reach the island, which is about 100 yards offshore.

"It's pretty narrow and deep. You can't walk across it. You have strong currents moving through there, particularly during tidal changes — that's what could lead to real hazards," Corbett said. "I discourage people from swimming across 'cause of that hazard. We do have, like any other beach, tragic drownings and a situation where you have a narrow channel with strong currents increases the hazard even more."