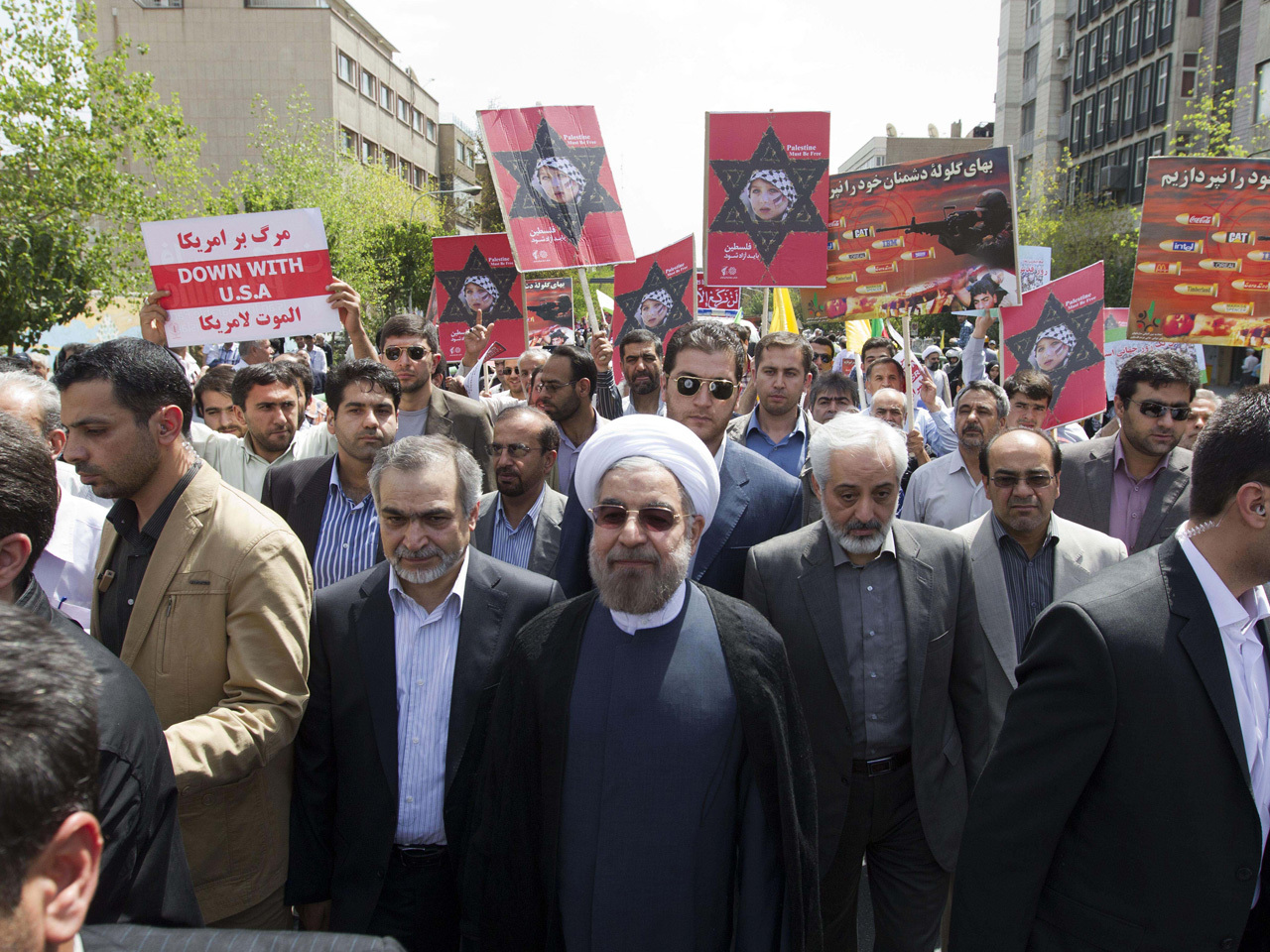 TEHRAN, Iran Ahead of his inauguration, Iran's new president on Friday reportedly called Israel an "old wound" that should be removed, but the latter half of that statement was immediately challenged by a varying interpretation of his remarks.

Hasan Rouhani's remarks about Israel — which Iran considers to be its archenemy — seemed to echo longstanding views of other Iranian leaders and could tarnish his image in the West as a voice of moderation in Iranian affairs.

But no Iranian leader is likely to diverge from Iran's longstanding denunciations of Israel and the remarks, made as tens of thousands of Iranians marched in support of Muslim claims to the holy city of Jerusalem, are not necessarily evidence that Rouhani will roll back his support for calmer relations with the West, including possible one-on-one dialogue with Washington.

The remarks themselves may not have been accurately interpreted when they were first reported by the ISNA student news agency, which like most Iranian media is controlled tightly by Iran's clerical regime. State-controlled Press TV later broadcast video showing Rouhani making less contentious remarks:

"In our region there's been a wound for years on the body of the Muslim world under the shadow of the occupation of the holy land of Palestine and the beloved al-Quds (Jerusalem)," Rouhani said, according to a translation by the Reuters news agency.

The earlier quote, which came from ISNA, was most notable for its inclusion of the call for the "wound" to be "removed":

"The Zionist regime has been a wound on the body of the Islamic world for years and the wound should be removed," ISNA quoted Rouhani as saying.

The two versions of his comments could not immediately be reconciled.

The president-elect also expressed doubts, according to ISNA, about the possibility of an Israeli-Palestinian peace deal even as the two sides resumed negotiations in Washington this week, ending a five-year freeze in Mideast talks.

"Israelis show a compromising face to the world but continue their expansionism in practice," Rouhani said according to Fars, another semi-official news agency.

Israel's Prime Minister Benjamin Netanyahu promptly condemned Rouhani's remarks. The Israeli leader has urged the world to step up pressure on Tehran to halt its disputed nuclear program with tougher sanctions and threats of military action.

Rouhani won a landslide victory in Iran's June 14 presidential election and is to officially replace Mahmoud Ahmadinejad on Sunday.

Rouhani has pledged to follow a "path of moderation" and promised greater openness over Iran's nuclear program, which has placed it at odds with the West.

Netanyahu said Rouhani's statement on Friday should serve to "wake up the world from the illusion" that a new Iranian president meant a new policy by Tehran.

"The real face of Rouhani has been exposed earlier than expected," Netanyahu said. "This is what the man thinks and this is the Iranian regime's operational plan ... A country that threatens to destroy Israel must not be allowed weapons of mass destruction."

Rouhani spoke at an annual pro-Palestinian rally marking "Al-Quds Day" — the Arabic word for Jerusalem — and although his remarks appear contrary to his outreach efforts to the West, they should also be seen in the context of internal Iranian politics where softening the establishment's anti-Israeli stand is not an option.

Iran does not recognize Israel and has since the 1979 Islamic Revolution observed the last Friday of the Islamic month of Ramadan as "Al-Quds Day." Tehran says the occasion is meant to express support for Palestinians and emphasize the importance of Jerusalem for Muslims.

Jerusalem's eastern sector houses sensitive Jewish, Christian and Muslim shrines and is sacred to all three religions. Jerusalem is the holiest place in Judaism and the third holiest city in Islam, after the Saudi Arabian cities of Mecca and Medina.

Anti-Israeli rallies were held in cities and towns across Iran. In the capital, Tehran, tens of thousands took to the streets, chanting "Down with America" and "Death to Israel." Some protesters also burned American and Israeli flags.

Outgoing President Ahmadinejad — who was known for vitriolic anti-Israeli rhetoric while in office, including calls that Israel be destroyed — spoke to the crowds after Friday prayers at the Tehran University campus in his last public speech before his term ends.

"You Zionists planted a wind but you will harvest a storm," said Ahmadinejad. "A destructive storm is on the way and it will destroy Zionism."

Israel has not ruled out a military option against Iran's nuclear facilities, which the West suspects are geared toward making a nuclear weapon. Tehran denies the charge and insists its nuclear program is meant for peaceful purposes only.