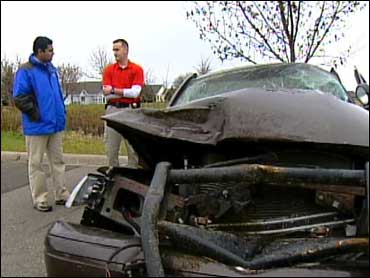 It's nightfall on one of the nation's roadways and one of North America's most dangerous animals is on the move.

"I just remember seeing a flash of fur and then the deer coming up into the windshield," said Sheriff's Deputy Justin Sabo, who was rushing to a medical emergency when his car slammed into a deer … and went airborne.

"I hit the tree first, and then the car spun in air on the side and I hit a power pole," he said.

Sabo was hospitalized overnight, but is lucky.

Each year more than 200 people die in similar accidents. Deer collide with vehicles 1.5 million times every year - causing more than $1 billion in damage.

In Minnesota alone there are more than 35,000 deer-vehicle accidents each year. That's so many that the state is experimenting with an early warning system for drivers. There is an invisible beam between these two posts. And when a deer interrupts the beam it triggers an alarm.

"Both beams have to be broken at the same time," Robert Weinholzer of the Minnesota Department of Transportation explains.

"A laser fence, exactly," he said.

And that "laser fence" seems to be convincing motorists to slow down. The old signs, with no lights, were largely ignored.

"So, is this working?" Sreenivasan asked.

"It started the end of last April and up to this point, we're less than 50 percent the number of deer that were hit during the same period last year," TK said.

Near Fort Dix, N.J., it is the deer who are being warned.

The sensors are in the side of the road and pick up the headlights as they come down.

Every time a car approaches these posts, lights and whistles scare deer away, from a stretch of road where car-deer collisions were common.

For now both projects are still experiments, and people like Jay Sabo who spend a lot of time on the road, are still mostly on their own.

To the former Army sergeant, now deputy sheriff it's a surprising hazard close to home.

"I wasn't expecting to survive Samarra, Iraq, as an infantryman, and then to come back and almost get taken out by a deer.

But with growing numbers of cars - and deer - on America's roadways, there are bound to be more close calls.