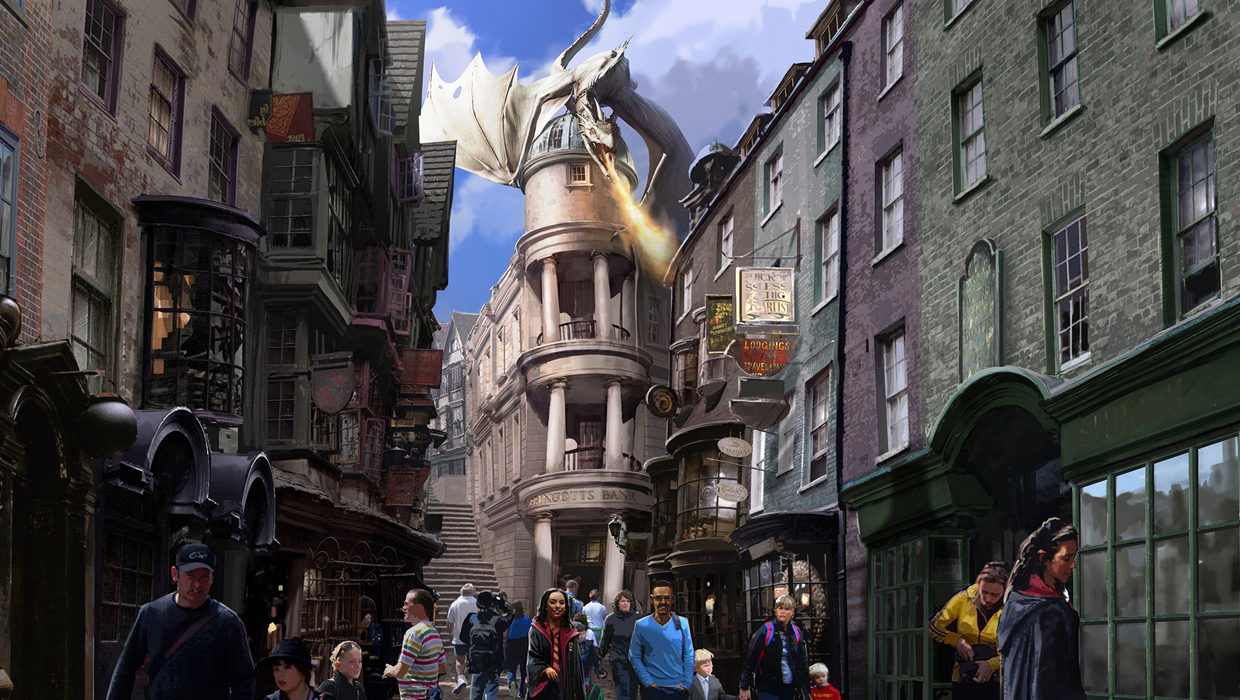 The new Harry Potter area opening at Universal Orlando Resort this summer, called Diagon Alley, will offer fans a new thrill ride themed on Gringotts bank from the Harry Potter book series, along with more than a half-dozen eateries and shops selling souvenirs like wands.

But the location of Diagon Alley will also require tickets for both of Universal Orlando's theme parks if guests want to see both the new and original Harry Potter attractions.

Diagon Alley will open at the Universal Studios park. The original Wizarding World of Harry Potter area, which opened in 2010, is located at Universal's Islands of Adventure park.

The two areas will be connected by a train called Hogwarts Express, but if fans want to see both, a two-park ticket will be required. Currently, single-day admission for both parks is $136.32, including tax, for anyone ages 10 and older.

"It's a one-of-a-kind two-park experience that will completely immerse you in the story," said Mark Woodbury, president of Universal Creative.

Universal Studios and Islands of Adventure are both part of the Universal Orlando Resort theme park, but guests can choose to buy tickets for one without the other if they don't want to visit both.

Woodbury unveiled the new details of Diagon Alley in a media webcast Thursday.

The new ride, Harry Potter and the Escape from Gringotts, described as Diagon Alley's "marquee" attraction, will be an indoor ride through Gringotts bank vaults. A park spokesman said other kinds of experiences to be offered in Diagon Alley will be announced at a later date.

Universal executives described the rich level of detail at Diagon Alley as "theatrical reality," with shops selling souvenirs drawn from the Harry Potter books such as supplies for Quidditch, a game played on broomsticks.

Woodbury said that one of his favorite shops is called Ollivanders: Makers of Fine Wands since 382 BC, where visitors can watch a wand choosing a wizard -- then the visitor can buy the wand.

"The attention to detail and authenticity was really important to the Harry Potter fans but also a marvel to the novice fan," said Woodbury. "They both really are captivated by the level of immersions and storytelling."

In addition to a previously announced eatery called the Leaky Cauldron, Diagon Alley will include Florean Fortescue's Ice-Cream Parlour, where fans can nosh on Harry Potter's favorite ice cream.

Among other new shops in Diagon Alley:

-Borgin and Burke's, a shop devoted to "Dark Arts" that sells masks, skulls and other "sinister items."

Diagon Alley will double the size of park space at Universal Orlando devoted to Harry Potter.

Universal has announced many changes to the Orlando parks in recent months, including an 1,800-room hotel called the Cabana Bay Beach Resort, which is based on a 1950s theme, and eight new restaurants in the CityWalk dining and entertainment area. In June 2013, the company also opened a 3-D thrill ride at Universal Studios based on the "Transformers" film and cartoon franchise.