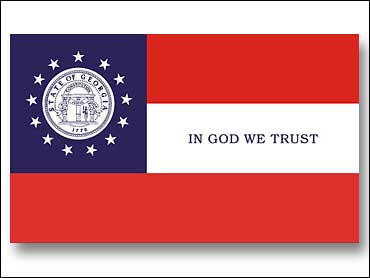 After months of debating Georgia's flag, state lawmakers struck a surprise compromise Friday — an entirely new flag that echoes an old Confederate flag but does not include the divisive Dixie battle emblem.

Gov. Sonny Perdue, who had proposed a statewide referendum on the flag dispute shortly after his upset victory last November, is now endorsing a completely new design that is similar to the national flag of the Confederacy, the so-called "stars and bars," rather than the more familiar battle flag. And the plan calls for no referendum until next year.

The Legislature, led by former Democratic Gov. Roy Barnes, had voted in 2001 to shrink the Confederate battle emblem on the state flag. It had been added in 1956 after the federal government ordered public schools to desegregate. The change shrank it from two-thirds of the design to the size of a postcard.

But his proposal for a referendum to let Georgians choose between the 1956 flag and its replacement drew the strong opposition of Georgia business leaders, who said they feared it will hurt the state's image and could cause black organizations to boycott Georgia.

The new flag design, approved by the House Rules Committee on Friday, resembles the first national flag of the Confederacy — three red and white stripes, with a blue field in the top left corner. The state seal would be in the blue corner, and the words "In God We Trust" would be written in the middle white stripe.

Perdue's bill calls for the Legislature to change the flag to the new design immediately. Then, in March 2004, a public referendum would be held to let voters decide whether they want to keep that flag.

Only if the Perdue flag was rejected by voters would a second referendum be held, this time in July 2004, asking voters if they want to return to the Georgia flag dominated by the Confederate battle emblem.

"We believe this represents a compromise," said Rep. Glenn Richardson, who sponsored Perdue's flag bill. "This will bring this to a conclusion." Perdue did not take questions about the new flag at a Friday morning appearance.

The new design comes from an unlikely corner, Rep. Bobby Franklin, a conservative Republican. He was once a strong supporter of the Confederate battle emblem, but he gave a speech to the Rules Committee this week saying he had changed his mind. Franklin repeatedly cited biblical passages and said the rebel "X" has been ruined forever by white supremacists.

"Can't you honor heritage in a manner that's not offensive?" Franklin said after his flag was adopted Friday.

Franklin originally wanted no public referendum, saying it would strain race relations. Now he says he understands why Perdue wanted a follow-up vote. When the flag was changed in 2001, the public was given no say.

"This compromise gives everyone a voice," he said.

Several Democrats in the committee disagreed, saying they liked Franklin's flag but wanted to prevent any chance of the Confederate cross making it to a public vote.

Rep. Calvin Smyre, a black Democrat from Columbus, said it would be "total havoc" if the new flag failed its first test.

Another Democrat, Savannah Rep. Tom Bordeaux, wondered why "In God We Trust" would be on the banner.

The flag bill passed 18-7 and heads to the full House next week, which could make changes. The Senate must also sign off on the new flag.

Southern heritage supporters were miffed the bill doesn't set up an automatic vote on the rebel emblem. Dan Coleman, spokesman for the Georgia chapter of the Sons of Confederate Veterans, was not mollified by the Confederate roots of the proposed new flag.