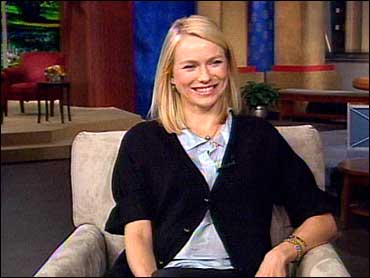 Naomi Watts has had her fair share of demanding roles in movies before -- "Mulholland Drive," "21 Grams" and "King Kong" among her finest -- but her newest film takes the cake.

While 11 weeks pregnant with her son, Alexander, Watts said she had to conduct a series of daring stunts, including learning how to drive a 400-pound Russian motorcycle, to accurately portray a midwife who gets entangled with the Russian mafia in the thriller "Eastern Promises," due out in theaters Friday.

She completed nearly 90 percent of her character's stunts before learning she was pregnant, she said.

"That was a big challenge, believe me," Watts told The Early Show co-anchor Hannah Storm about her stunts involving the motorcycle. "But I conquered it and then had the gusto to say I was pregnant and I didn't want to get on it anymore."

Watts listed director David Cronenberg as the chief reason why she decided to take up the physically draining role. "(I have) followed his very unique career," Watts said. "He's always stretching them and doing something completely different ... He is one of those great teachers."

The complexity of the character she plays in the film also contributed to her desire to do the movie, she said.

"She's a really ordinary woman who gets caught up in the wrong crowd," Watts said of her character Anna. "(She) actually has a little bit of a sense of danger herself because she stays in that world and wants to explore it."

A lack of sleep on a nightly basis and learning to coordinate her work schedule with her home duties has been Watts' biggest challenge off the screen, she said. She also said that the undying persistence of the paparazzi has also made motherhood as a Hollywood actress "very difficult," almost to the degree that she's at times hesitant to leave her house.

But the perks of having a child make it all worth while, she added.

"When he starts engaging and he's looking at you when you're feed him and just the simplest moments can means so much," she said. "I love it."