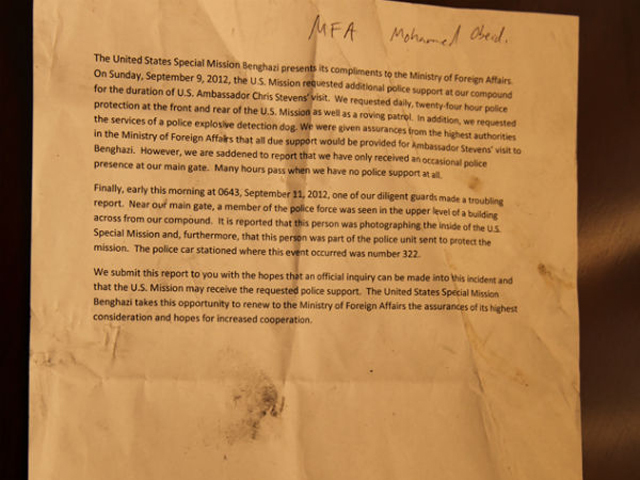 On the very day U.S. Ambassador Christopher Stevens and three other Americans were killed in the U.S. Consulate attack on Libya in September, someone on the U.S. team in Benghazi apparently spotted a suspicious member of the local police force photographing the inside of the U.S. mission.

Reporters from ForeignPolicy.com say they found a draft letter expressing concern among documents left on site more than six weeks after the attack, and nearly a month after the FBI was there collecting evidence.

Notations indicate the letter was intended for the head of the Libyan Ministry of Foreign Affairs in Benghazi.

"... early this morning at 0643, September 11, 2012, one of our diligent guards made a troubling report. Near our main gate, a member of the police force was seen in the upper level of a building across from our compound. It is reported that this person was photographing the inside of the U.S. special mission and furthermore that this person was part of the police unit sent to protect the mission."

It goes on to ask for an investigation. It's unclear whether the letter was sent and what action may have been taken, but it reflects the continued security concerns of U.S. diplomats in Benghazi in the weeks and days leading up to the assault.

Another draft letter dated two days before the attack complains that requested police support for Ambassador Stevens' visit had not been supplied.

"...We requested daily, twenty-four hour police protection at the front and rear of the U.S. mission as well as a roving patrol. In addition we requested the services of a police explosive detection dog. We were given assurances from the highest authorities in the Ministry of Foreign Affairs that all due support would be provided for Ambassador Stevens' visit to Benghazi. However, we are saddened to report that we have only received an occasional police presence at our main gate. Many hours pass when we have no police support at all."

As special security teams for Libya were reduced in them months before the attack, the U.S. diplomats increasingly relied on the local Libyan security and the police force for protection. The commander of the U.S. military security team that left Benghazi a month before the attack told me relying on the Libyans was risky business because they were often found to be affiliated with the enemy.