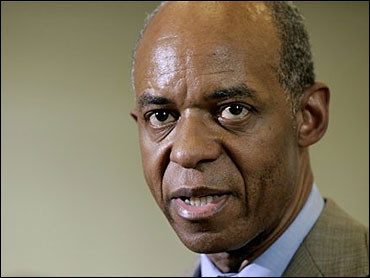 Things are not getting any easier for Rep. William Jefferson, who has denied any wrongdoing despite $90,000 allegedly being found in his freezer, and has refused to resign.

Tuesday, the Louisiana Democrat found himself back in the news as court documents revealed new details of the scandal, and Rep. Steny Hoyer, the Democratic whip, said he thinks Jefferson should give up his seat on the House Ways and Means Committee.

Asked whether that is premature, given that Jefferson has not been charged with any crime, Hoyer replied: "He sits on a tax writing committee and $90,000 was found in his freezer. At the very least he has a tax problem." The Maryland Democrat added that the Democratic caucus may have to take up the issue of Jefferson's status.

Details of an alleged deal between Jefferson and the vice president of Nigeria are laid out in an affidavit - previously filed to secure a search warrant of a Potomac, Md., home of the wife of the Nigerian official - unsealed Monday by the federal court in Greenbelt.

According to the affadavit, Jefferson told an FBI informant that Nigerian Vice President Atiku Abubakar sought up to $500,000 and a stake in a technology venture in his country.

Jefferson allegedly told the FBI informant that he delivered "African art" - a term authorities believe was code for cash - to the Abubakar house in Potomac at midnight on July 31, 2005.

The affidavit says delivery of the money came shortly after Jefferson allegedly received $100,000 in cash from the FBI informant. That money was supposed to help smooth the way for a Kentucky telecommunications company, iGate Inc., to do business in Nigeria.

It is unclear if any of that money was delivered to the vice president's home, and his possible role is described only by Jefferson in wiretaps the FBI made.

According to another search warrant affidavit - this one for Jefferson's congressional office - $90,000 in cash was found in a freezer at Jefferson's Washington home. A briefcase similar to the one Jefferson used to carry the money was found in a later search of his New Orleans home, according to federal court documents filed there.

The 39-page affidavit released Monday in Maryland, some sections of which remain sealed, does not mention Abubakar by name. But it does identify the Potomac home as the residence of Jennifer Douglas, Abubakar's wife. It also refers to "the Vice President of Nigeria" when detailing the alleged scheme. Although the search of the Potomac residence was mentioned in documents previously released by the courts, names and titles were redacted to keep them secret.

The informant was a northern Virginia businesswoman identified by law enforcement officials as Lori Mody. She went to the FBI when she believed Jefferson and others were defrauding her on the business deal. Jefferson discussed with her the "payment of bribes to high-ranking foreign government officials," including Abubakar, according to the affidavit.

An attorney for Abubakar did not immediately respond to requests for comment. In Nigeria, where Abubakar last week kicked off his campaign for president, his spokesman Mohammed Yakubu said they have yet to see details of the allegations. "We don't have anything to say until we have seen these reports or allegations," he said by telephone from Abuja, Nigeria.

Jefferson wrote a letter dated June 21, 2005 to Abubakar at the Nigerian embassy in Washington, alerting him to "a U.S. Company" that wanted to invest $50 million to provide high-speed Internet access in Nigeria using Nigerian telecom company Nitel's lines.

The congressman then met with Abubakar on July 18 in Potomac and the vice president "agreed to help secure the necessary approvals" for iGate to begin work in Nigeria. In return, Abubakar wanted at least 50 percent of the profits from another Nigerian company working on the deal and a payment of up to $500,000 before the deal was completed.

Jefferson allegedly described the payment as the "front end" and the profit-sharing deal as the "back end."

On Aug. 1, the night after he allegedly delivered cash to the vice president's home, the FBI recorded a conversation between Mody and Jefferson on whether the deal was completed. Jefferson allegedly said: "I gave him the African art that you gave me and he was very pleased."

Jefferson allegedly told Mody earlier that he was arranging the deal to benefit his five daughters. The affidavit states he demanded that one daughter, lawyer Jamila Jefferson, be retained to help set up the Nigerian venture.

Jefferson, who represents most of New Orleans, has served in Congress since 1990. The raid on his Capitol Hill office sparked outrage from congressional leaders who claimed the Bush administration was violating the separation of powers doctrine. President Bush later sealed FBI files on the raid for 45 days.

Former Jefferson aide Brett Pfeffer pleaded guilty and was given an eight-year term for his role in the bribery scandal. He is cooperating with authorities. Vernon Jackson, chief executive of iGate, also pleaded guilty to paying more than $400,000 in bribes to Jefferson.