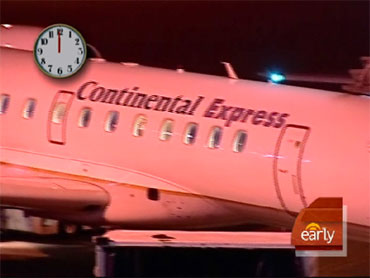 With its new regulations, the Obama administration is sending an unequivocal message to airlines that it won't tolerate the delays experienced by some passengers, such as an overnight ordeal in Rochester, Minn., last summer.

Under the new regulations, airlines operating domestic flights will be able only to keep passengers on board for three hours before they must be allowed to disembark a delayed flight. The regulation provides exceptions only for safety or security or if air traffic control advises the pilot in command that returning to the terminal would disrupt airport operations.

U.S. carriers operating international flights departing from or arriving in the United States must specify, in advance, their own time limits for deplaning passengers.

Airlines will be required to provide food and water for passengers within two hours of a plane being delayed on a tarmac, and to maintain operable lavatories. They must also provide passengers with medical attention when necessary.

During the snowy weekend, nobody had it worse than the passengers on AirJamaica flight 40 out of Baltimore, reports CBS News Correspondent Jim Axelrod. The plane was set to depart at 7 a.m. Saturday and finally pushed back at 8:35. After getting stuck, freed, then stuck again, the plane returned to its gate at 3 p.m. to unload 148 passengers after eight hours.

The AirJamaica flight joins a long list of air travel horror stories like the JetBlue passengers stranded for 11 hours on the tarmac at John F. Kennedy International Airport in New York three years ago.

From January to June this year, 613 planes were delayed on tarmacs for more than three hours, their passengers kept on board.

The new regulations, which were published Monday in the Federal Register, go into effect in 120 days.

"Airline passengers have rights, and these new rules will require airlines to live up to their obligation to treat their customers fairly," Transportation Secretary Ray LaHood said in a statement.

Airlines have strongly opposed a hard time limit on tarmac strandings. They say forcing planes to return to gates so that passengers can get off could cause more problems than it cures. They predict more flights will be canceled, further delaying passengers from reaching their destinations.

Last month, the department fined Continental Airlines, ExpressJet Airlines and Mesaba Airlines $175,000 for their roles in a nearly six-hour tarmac delay in Rochester, Minn. On Aug. 8, Continental Express Flight 2816 en route to Minneapolis was diverted to Rochester due to thunderstorms. Forty-seven passengers were kept overnight in a cramped plane amid crying babies and a smelly toilet because Mesaba employees refused to open a gate so that they could enter the closed airport terminal.

The case marked the first time the department had fined an airline for actions involving a tarmac delay. Transportation officials made clear the case was a warning to the industry.

Consumer advocates have been pressing the department and Congress for at least a decade to do something extended tarmac delays. However, past efforts to address the problem have fizzled in the face of industry opposition and promises to reform.