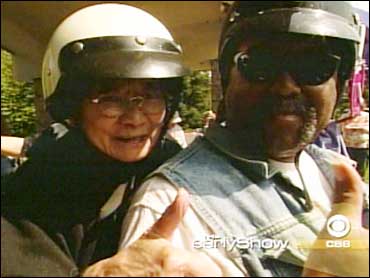 Would you let your Great-Grandma jump on the back of a Harley? You may consider it, according to The Early Show National Correspondent Hattie Kauffman, who reported on an unlikely combination: nursing home residents and Harleys.

Every six months, the elderly residents of Marionwood Nursing Home, which is near Seattle, finds their daily slow-pace day get a shot of adrenaline.

Thanks to a local Harley riders club, the thrill for the seniors is back, although it may seem an odd match.

In fact, the motorcycle riders Kauffman talked to donate their time, which bring some smiles to the seniors.

"As long as they're going to embrace us, we're going to give them all the love we can," says Harley rider Don Estill.

The seniors enthusiastically embrace the bike rides. Joann Dejong keeps a photo of her Harley experience at her bedside.

Dejong explains, "You feel free on a motorcycle."

"I'm really glad that the motorcycle club has decided to do this … for their part to the service of humanity." says Mary Tanji.

But Marionwood Nursing Home's activities director Diane Bixler says it's not all about humanity. There's just something sexy about bikers.

"There's nothing better [than] the handsome man in black leather on a motorcycle. And these women love it," says Bixler. "They get on and hold on tight … At all ages."

Residents are wheeled outside, where they anxiously await their guests. They know the bikes are arriving by the roar of the Harleys.

"It's beautiful to see our residents happy and doing something out of the ordinary, and something they look forward to for six months," says Bixler.

Six months can be a lifetime in a nursing home. Some residents have died since the bikers last visit. Don Estill has some nervousness each time he arrives, because he's not sure if 97-year-old Florence Keizer will still be here.

But, Keizer was there waiting for her turn to ride. And, Keizer says she loves riding with Estill.

The same device usually used to lift residents out of bed, is now placing them gingerly on a motorcycle.

The nursing home does say it is concern about the fragility of the elderly when they ride on motorcycles. As an extra precaution, the residents are strapped onto bikes and those deemed too frail, ride in a sidecar.

Ninety-five-year old Rita Whetzel gave a thumbs-up and she was ready to roll. Her driver is Ken Rutz

"It's a wonderful feeling … it's just a very special moment where we can go there and do this with these people," says Rutz.

Don Estill says, "You know they just need to get out, and get away, enjoy themselves. We're having as much fun as they are, to tell you the truth."

At the end of the day, the seniors will be back in the nursing home. But none of them will be the same.

"It's nice to get that feeling back again, you know -- free and in control," 82-year-old Mary Tanji says.

The riders from eastside Harley-Davidson say they've been contacted by other motorcycle clubs, *and* nursing homes around the country, about how to schedule similar rides.