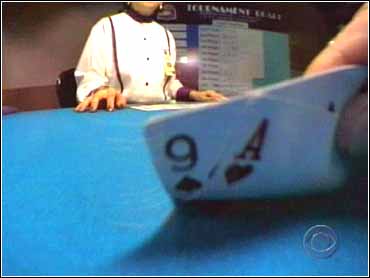 Legislators have approved a bill allowing Nevada to become the first state in the nation to offer Internet gambling - a jackpot that could be worth $6 billion to casinos by 2003.

Experts estimate that revenues from Internet gambling - largely conducted by offshore companies because of the U.S. ban - reached $1.5 billion last year and could quadruple by 2003.

Nevada's bill, which moved to Gov. Kenny Guinn for signature on a 17-4 state Senate vote, began as a uniform statewide work card system for casino workers. The Internet gambling provisions were amended into the bill after an initial plan for such gambling died in the Senate.

To ensure Nevada's expansion into Internet gambling moves ahead smoothly, the state Gaming Control Board and state Gaming Commission must first draft and adopt rules governing such gambling.

Those requirements would include assurances that minors wouldn't be able to play. Also the games couldn't be played by online players in states that prohibit gambling.

Some New Jersey legislators wanted to beat Nevada into cyberspace, but an Internet gambling bill introduced there in January is stuck in committee. That plan, to let casinos offer blackjack, roulette, slot machines and other games over the Web, is unlikely to see action before upcoming summer break.

Nevada State Sen. Terry Care, a Democrat, opposed the latest bill, saying the $500,000-two-year licensing fee for Internet gambling would makes it impossible for small casinos and entrepreneurs to participate.

"What this is asking us to do is to legislatively sanction a monopoly for an exclusive few that has always prided itself on the competitive nature of the marketplace," Care said.

Hotel-casinos with unrestricted gambling licenses could apply to conduct Internet gambling, posting the $500,000 fee when applying for two-year licenses.

By John Wilkerson
© MMI The Associated Press. All Rights Reserved. This material may not be published, broadcast, rewritten, or redistributed