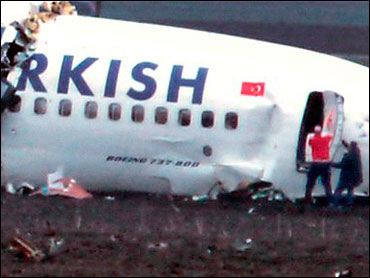 Investigators said Wednesday a faulty altimeter played an important role in a Turkish Airlines crash that killed 9 people in the Netherlands.

The Dutch Safety Authority said the plane was being landed on automatic pilot and the problem with the altimeter, a device that measures altitude, led to a loss of airspeed before the crash.

The Boeing 737-800 carrying 135 passengers and crew went down in a muddy field less than a mile short of the runway at Amsterdam's Schiphol Airport shortly before it was due to land on Feb. 25.

Chief investigator Pieter van Vollenhoven said the airplane had twice before experienced problems with its altimeter. Boeing has been instructed to warn clients of the problem, he said.

At 1,950 feet "the airplane's left radio altimeter suddenly registered a change in altitude" of negative 8 feet. "It didn't only register it, but passed it on to the automatic steering system," Van Vollenhoven said.

Van Vollenhoven said it was not unusual to land a plane on autopilot.

According to conversation recorded between the plane's captain, first officer and an extra first officer on the flight, the pilots noticed the faulty altimeter but didn't consider it a problem and didn't react, Van Vollenhoven said.

Gas to the engines was reduced and the plane lost speed, decelerating until, at a height of 450 feet the plane was about to stall, and warning systems alerted the pilots.

"From the "black box" (data recorders) it appears that then the pilots immediately gave gas, full gas, however it was too late to recover," Van Vollenhoven said.

He said that the pilots had been unable to see the runway at the time the plane began its descent due to weather conditions - cloudy with a light rain.

The plane fell into a freshly plowed field, striking the ground tail first and breaking into three pieces.

Those killed in the crash included five Turks and four Americans.