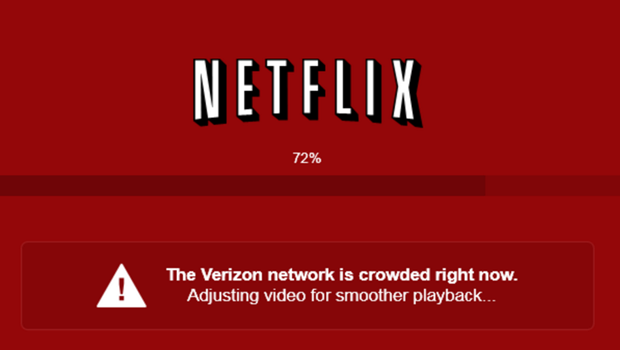 The next time you're binge-watching a new show on Netflix and the video suddenly slows down to a crawl or begins to buffer, you may get an error message blaming your Internet service provider.

The message was originally spotted by Yuri Victor, a developer at Vox Media, reports news blog Quartz. It blames a slowdown on the fact that "the Verizon network is crowded right now."

The message seems to be part public service announcement and part PR campaign. It is the latest jab in the fight between Internet companies like Netflix and Internet service providers like Verizon over the concept of net neutrality -- the belief that all data must have equal access to high-speed transmission.

Netflix's new tactic was seen a day after the Federal Communications Commissions reported its website went down when comedian John Oliver's 13-minute rant about the importance of net neutrality sent a horde of Internet commenters to the site. Netflix was one of more than 100 companies that signed a recent letter opposing FCC Chairman Tom Wheeler's proposed rules, which seemed to allow for the possibility of an Internet "fast lane."

It's no wonder why. Netflix's download speeds began deteriorating towards the end of last year -- with the company accusing the ISPs and the ISPs denying the claim -- forcing Netflix to agree to pay Comcast for faster Internet speeds in February. The company also entered a similar agreement with Verizon in April. After the deals were struck in both cases, Internet speeds improved, according to Netflix's ISP speed index -- but only barely for Verizon customers.

Google launched its ISP speed rating system late last month allowing Internet consumers to see how good -- or bad -- their provider is. Labeling the best ISP as "YouTube HD Verified," it says consumers on those networks can expect smooth playback on YouTube most of the time -- especially when watching videos in high definition.