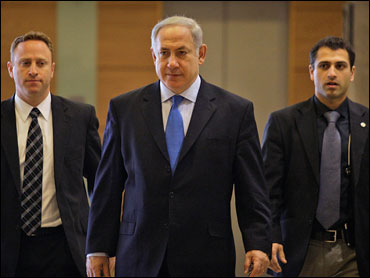 Avigdor Lieberman, one of the top nationalists in Israel heads the right-wing Yisrael Beitenu party. CBS News correspondent Robert Berger reports that Lieberman has been accused of racism because he takes a hard line on Israeli Arabs.

Lieberman has suggested that Israel's Arab citizens sign loyalty oaths or lose their citizenship. Although that plan is not likely to be implemented, his designation as foreign minister could harm Israel's international ties.

Lieberman has criticized U.S.-sponsored peace talks and says there can be no negotiations on sharing Jerusalem with the Palestinians.

The European Union urged Netanyahu to craft a government that embraces the long-standing goal of an independent Palestinian state living side by side with Israel - signaling that the appointment of Lieberman as foreign minister would be seen in Europe as a setback to Middle East peace efforts.

"Let me say very clearly that the way the European Union will relate to an (Israeli) government that is not committed to a two-state solution will be very, very different," Javier Solana, the EU's foreign and security affairs chief, said Sunday.

Lieberman's appointment to the post is not yet finalized, however. Likud spokeswoman Dina Libster said the coalition agreement included a provision that both sides were prepared to form a government that would include moderate partners, such as the Kadima Party of the current foreign minister, Tzipi Livni.

That wording leaves open the possibility that Livni might retain her current job if she were to join such an alliance. Local media reported over the weekend that Netanyahu has resumed overtures to recruit Livni.

The agreement with Yisrael Beitenu is the first Netanyahu has initialed on his way toward setting up a coalition of hawkish and Orthodox Jewish parties.

The government taking shape would take a harder line on Palestinian and Arab issues than the outgoing administration of Prime Minister Ehud Olmert.

Netanyahu has criticized last year's U.S.-sponsored peace talks between Israel and the Palestinians, aimed at partitioning the land and establishing a Palestinian state. The talks made little progress, and on Sunday Olmert blamed the weak Palestinian government for the failure. In turn, Palestinian negotiators blamed Israel, citing expansion of West Bank settlements and hundreds of roadblocks in the West Bank.

Netanyahu favors focusing on efforts to bolster the Palestinian economy, leaving issues like borders, sovereignty and Israeli settlements for a later stage. In defiance of Israeli commitments to international plans, Netanyahu favors expanding Israel's West Bank Jewish settlements to allow for "natural growth," accommodating the growing families in the communities.

Palestinians reject that approach and have the backing of the new Obama administration. In a recent visit, Secretary of State Hillary Clinton said the goal of negotiations must be the creation of a Palestinian state living next to Israel in peace.

Though Lieberman now says he supports Palestinian statehood, he also believes such a state should include territory inside Israel containing heavily populated Arab areas. Such a plan could strip hundreds of thousands of Arabs of their Israeli citizenship, regardless of their feelings on the issue.

Speaking in Brussels, Belgium, before the Likud-Yisrael Beitenu accord was signed, Palestinian Foreign Minister Riad Malki said the emerging government was "anti-peace," adding, "We have to declare that sadly there is no partner on the Israeli side to negotiate with."

Netanyahu still needs to add several other parties to reach a majority in the 120-member parliament. In the election last month, his Likud won 27 seats and Yisrael Beitenu added another 15.

Kadima won 28 seats, but Netanyahu was chosen to form a government because a majority of members of parliament said they favored him over Livni as premier.

Netanyahu's negotiators are set to meet later Monday with a team from Shas, an ultra-Orthodox Jewish party with 11 seats in the parliament. If Kadima stays outside, Netanyahu is expected to try to bring in smaller hard-line parties like Jewish Home, National Union and United Torah Judaism, giving him a majority of 65.

But several of the parties have conflicting claims and agendas, and getting all of them to agree is not assured.