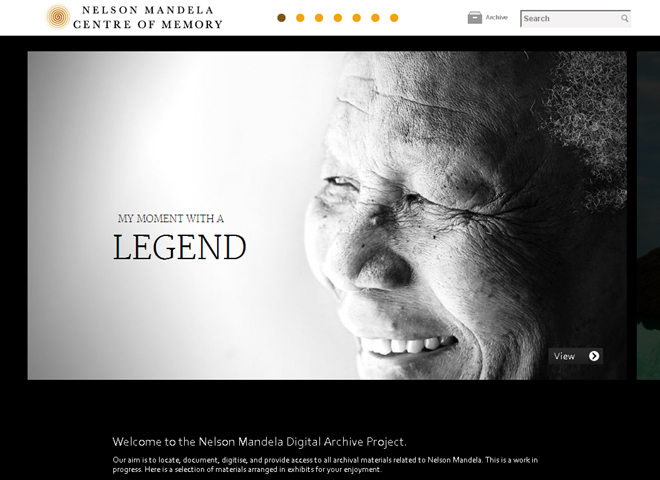 At a news conference in Johannesburg Tuesday, Mandela's archivists and Google said their $1.25 million project to digitally preserve a record of the anti-apartheid leader's life is now online. The project was first announced a year ago.

Researchers — and anyone else — from around the world now have access to hundreds of documents, photographs and videos. The archive has been launched with more than 1,900 entries, and more are being added.

"The Mandela Digital Archive Project shows how the Internet can help preserve historical heritage and make it available to the world," Steve Crossan, director of the Google Cultural Institute, said Tuesday.

Similar Google projects have focused on the Dead Sea Scrolls and the Yad Vashem Holocaust materials.

Mandela, who spent 27 years in prison for fighting against racist white rule, became South Africa's first black president in 1994 and served one five-year term. He now is officially retired and last appeared in public in July 2010.

Mandela inaugurated his memory center in 2004 as part of his charity and development foundation. The center houses an archive and hosts conferences and other events to promote justice and reconciliation worldwide.

Verne Harris of the Nelson Mandela Centre of Memory said seeing the efforts of his center and Google realized "is invigorating."

In one video, former President F.W. de Klerk, who shared the 1993 Nobel Peace Prize with Mandela for negotiating himself out of power, recalled being asked to address parliament alongside Mandela in 2004. It was the 10th anniversary of the day Mandela became South Africa's first black president. Mandela took de Klerk's arm as lawmakers applauded.

"It is, if you now look back, a symbol of how reconciliation can manifest itself," de Klerk said in one of a series of videos in which people reflect on encounters with Mandela.

A photograph on the archive site shows Tutu, his wife and their grandchildren with Mandela after a church service on the Tutus' 50th wedding anniversary. In a caption, Tutu's granddaughter Nyaniso Burris remembers shaking Mandela's hand that day when she was 8 and telling her grandfather, "I won't wash this hand for the rest of forever."

In lines of neat handwriting in blue ink on paper that could have been torn from a schoolgirl's notebook, Mandela muses on Valentine's Day, characteristically referring to himself in the third person. The 1995 note appears to be a draft of a letter to a young admirer, in which Mandela said his rural upbringing by illiterate parents left him "colossally ignorant" about simple things like a holiday devoted to romance.

"Moving to the cities one was gradually drawn into mainstream politics, and there was little room for upgrading oneself with information on such issues," Mandela wrote. "Only during the last five years did I receive Valentine cards and gifts."