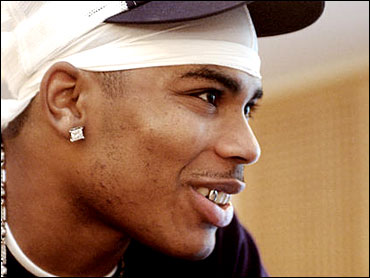 Nelly's a busy man these days, and that will be no different on Sunday's MTV Video Music Awards, when he not only performs with Christina Aguilera; he also could walk away a winner. He's nominated for best hip-hop video for his P. Diddy collaboration, "Shake Ya Tailfeather."

The Early Show's Dave Price caught up with Nelly to get the inside scoop on the awards and what it is like to be part of it all.

"I just try to have fun," Nelly said, "I look forward to a lot of these award shows, especially the VMAs because you never know what's going to happen."

Last year, there was Madonna and Britney kissing. Any guess as to who or what might be outlandish provocative, crazy, just over the line Sunday night?

"No, man," Nelly told Price, "You don't know. You just don't know and I think that's why everybody enjoys it so much, and everybody is so enthused about coming, besides it being in Miami."

As for rapping, Nelly predicts that it will still be alive 50 years from now. "It's the voice of the youth. Rap is now 30-plus years, meaning there are kids who are 18, 21, 15 years old and rap has been out before them. So now it has a history."

For years, rap (forgive the pun) got a bad rap, Price noted. Are Nelly and other rap performers ready to become role models?

"I don't look at entertainers and athletes as role models," Nelly replied. "I think we can be inspirations. A role model should be someone that is closer to you, someone you can pick up a phone and call. You can't do that with entertainers and athletes. But do I think we can be inspirations for taking something from a bad situation and turn it into good? I think a lot of us came from bad situations and a lot of kids can relate to us coming out of a bad situation, It may not be the same one, but we can overcome that, and this is what you can be if you just work hard."

For Nelly, hard work has led to hip-hop stardom, and multiple-platinum records. If he could do it for himself, Price wondered, could he also do it for him?

Price insisted (pleaded, more like it) to make him a star in 30 seconds.

"I'm an entrepreneur, not a miracle worker," Nelly said.

Price gave it a shot. Wearing Nelly's hat and watch, he tried to imitate the rapper.

Downcast, Price concluded his report, "Guess that wraps it up. Give you back your watch, thanks for the dream."

Wanting to be nice, Nelly assured him, "We can still hang out."

In addition to the VMAs, Nelly is ready to release two CDs simultaneously. One is called "Sweat," the other is called "Suit;" and he's in the upcoming film, "The Longest Yard."

At least 1 injured in Navy boat fire in San Diego