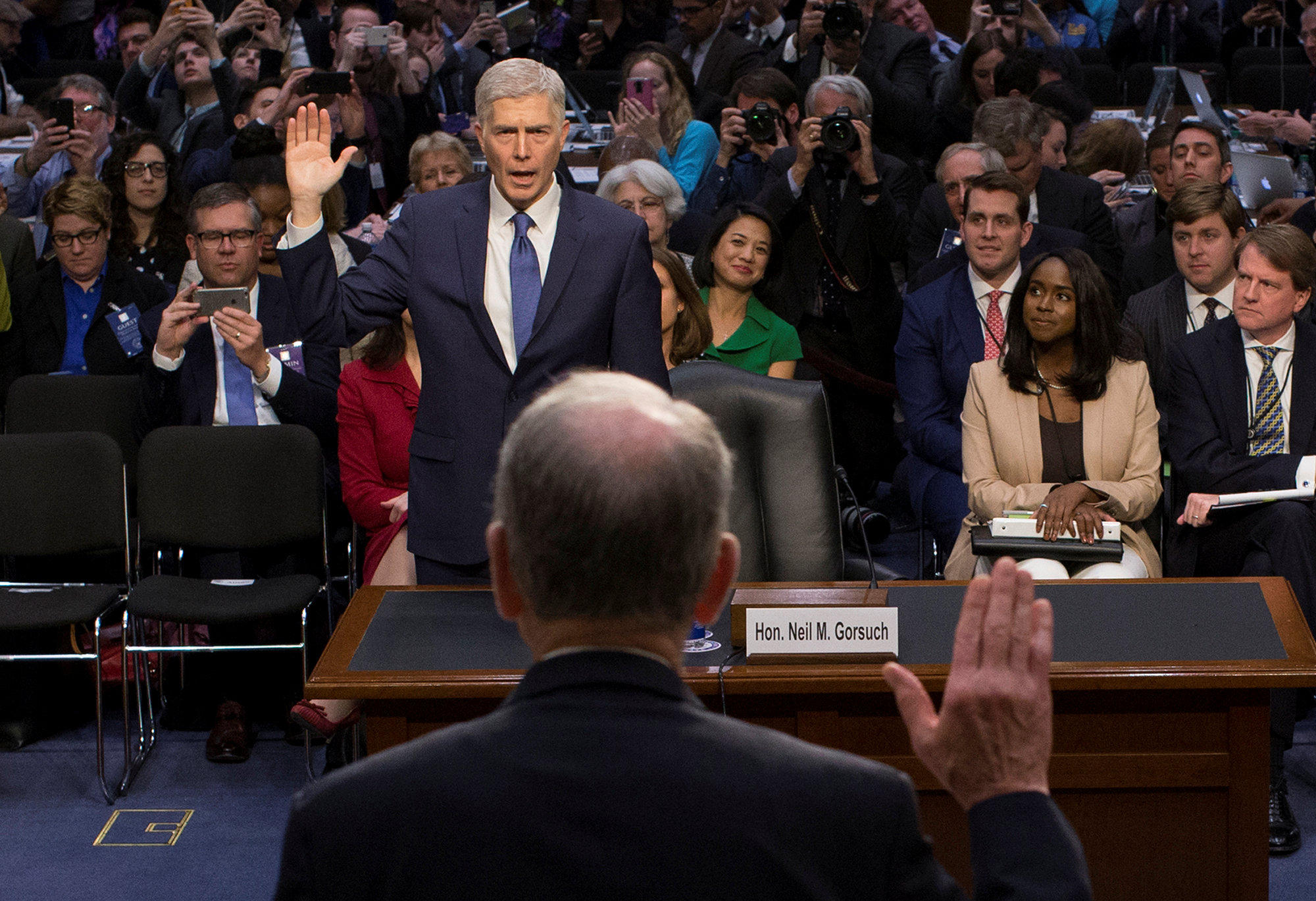 Supreme Court nominee Neil Gorsuch is in for a long day of testimony at his confirmation hearings Tuesday. The chairman of the Senate Judiciary Committee, Chuck Grassley, indicated it would be a 10-hour day -- and that’s without including any breaks. Grassley plans to let all of the 20 senators on the committee question Gorsuch for a half-hour each.

The first day foreshadowed the fights ahead with Democrats -- over cases, judicial independence, and the fact that he’s not Merrick Garland, the judge nominated by former President Obama after the death of Justice Antonin Scaliay over a year ago. There will be questions for Democrats, too, as the day unfolds: they’ll have to consider whether to block a nominee who is clearly qualified to serve on the nation’s highest court, and who doesn’t change its balance.

On day three, outside witnesses will testify about Gorsuch. Grassley plans to hold the committee vote on his nomination on Apr. 3, and Senate Majority Leader Mitch McConnell has said he’s confident Gorsuch will be confirmed before the April congressional recess.

Here’s what to look for as Day 2 plays out.

In her opening statement, Judiciary Committee ranking member Sen. Dianne Feinstein (D-California) referenced a case in about a freezing-cold trucker in Illinois, a case on which Gorsuch ruled as an appeals court judge.

The driver in question, Alphonse Maddin, had claimed he was wrongly fired after abandoning his truck’s broken-down trailer in sub-zero winter weather and driving away in the truck to find help. Maddin’s employer had given him orders to wait with the trailer for help; he turned around when the repair truck came -- too late for his employer. In the case, Gorsuch ruled against the driver, saying Maddin “wasn’t fired for refusing to operate his vehicle” -- he noted that perhaps Maddin shouldn’t have been fired, but that staying in the truck and waiting for help was the only way he would have been legally protected.

Maddin appeared with Democratic senators at an event before the start of Gorsuch’s hearings to discuss the case, and Democrats have used it as proof that Gorsuch has sided with corporations and business executives over individuals and employees. With Democrats on the Judiciary Committee using their opening statements Monday to blast the corporate-friendly tendencies of the Supreme Court under Chief Justice John Roberts, this topic gets at a bigger question about how Gorsuch would affect the overall makeup of the Court.

Feinstein wasn’t the only senator to mention the trucker case on Monday, and it’s virtually certain she won’t be the only one to ask him more about it on Tuesday.

On Monday, Democratic senators also previewed another line of attack on Gorsuch: his ruling in Hobby Lobby vs. Sebelius, a case before the U.S. Court of Appeals of the 10th Circuit, in which Gorsuch ruled with the majority. The case involved the owners of the Hobby Lobby franchise – the Green family, who are practicing Christians -- and their objection to covering birth control for their employees, as mandated by the Affordable Care Act (ACA).

The well-publicized and divisive case ended in a ruling in the Green family’s favor, with Gorsuch writing a concurring opinion. “As they understand it, ordering their companies to provide insurance coverage for drugs or devices whose use is inconsistent with their faith itself violates their faith, representing a degree of complicity their religion disallows... No doubt, the Greens’ religious convictions are contestable. Some may even find the Greens’ beliefs offensive. But no one disputes that they are sincerely held religious beliefs,” Gorsuch wrote in his opinion, according to the Chicago Tribune.

Expect Gorsuch’s stand on the matter to face hostile inquires from Democrats on Tuesday. Delaware Sen. Chris Coons, in particular, was vocal on Monday about his belief that religious freedom does not give persons “the freedom to push our beliefs into the public square” – an apparent reference to Hobby Lobby and similar decisions that occurred in the wake of the ACA’s passage.

Any softening from Democrats?

Though they had plenty to criticize on Monday, nearly every Democrat on the Judiciary Committee stressed that Gorsuch has impeccable credentials, a top-notch education and the experience necessary to serve on the nation’s highest court.

Their argument, then, was not so much that Gorsuch isn’t qualified for the job -- it’s that at a time when politics are particularly divisive, they want to ensure Gorsuch will maintain his independence. Sen. Amy Klobuchar (D-Minnesota), for example, said Gorsuch’s positions can’t be evaluated in a vacuum but “in the context of the world in which we live.” Sen. Al Franken called it a “critical juncture in our nation’s history.”

Given the fact that Gorsuch is nearly universally believed to be a qualified judge, do any Democrats soften their tone toward him? And will any on the Judiciary Committee cross over to support him?

One of the deciding questions for wavering Democrats hinges on whether Gorsuch can convince them of his judicial independence, especially given the president’s repeated criticism of the judicial branch. Mr. Trump criticized the judge who suspended his first travel ban, referring to U.S. District Court Judge James Robart as “a so-called judge,” and adding that his decision in the case was “ridiculous and will be overturned.” He also tweeted that if “something happens,” then “blame him and court system.”

Gorsuch, who was in the midst of meeting the senators who will be voting on his nomination, told a few of them that he was “disheartened” and “demoralized” by the comments.

In his opening statement, Gorsuch presented his record as an independent one, telling senators that “my decisions have never reflected a judgment about the people before me -- only my best judgment about the law and facts at issue in each particular case.”

He also defined the duties of each of the branches, declaring that it’s the job of Congress to make the laws, for the executive branch to enforce them -- and for “neutral and independent judges” to apply them. He also held up as an example Justice Byron White, whom he clerked for, and who, he said, “followed the law wherever it took him.”

Does he slip up?

Here’s what we know about Neil Gorsuch: that he is a conservative jurist and a succinct writer with an impeccable educational pedigree, including degrees from Harvard Law and Oxford University. His resume has put Democrats in something of a pickle, as it seems tailor-made for the Supreme Court. He is, however, relatively young at age 49, which means it’s plausible, if he is confirmed, that he’ll be issuing conservative opinions from the bench for many decades to come -- a bad scenario for liberals hoping to one day regain a majority on the court.

But there’s a longshot opportunity for Democrats if Gorsuch slips up in his testimony and says something that makes his nomination more precarious. Additionally, a crafty Democrat could have uncovered something embarrassing in his past – Gorsuch has a paper trail at this point, but vetting of the kind he is now exposed to has been known to turn up damaging details that can sink a candidate. In perhaps the most famous (and now rather quaint) example of this happening, Judge Douglas Ginsburg was forced to rescind his own nomination in 1987 after it was reported that he smoked marijuana not only in his youth, but also as a Harvard professor.

‘You like to think people who are appointed to the Supreme Court respect the law,” then-Senate Judiciary Chairman Chuck Grassley, an Iowa Republican, remarked at the time. Should Gorsuch have any similar undiscovered skeletons (which seems unlikely), or does not impress senators during his testimony for whatever reason, what looks like a slam-dunk confirmation could quickly come undone.