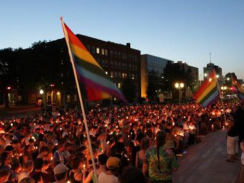 (CBS/AP) - A Nebraska woman who claimed that three masked men broke into her home last month, carved anti-gay slurs into her and tried to set her house on fire will be charged with lying to police about the purported attack, a prosecutor said Tuesday.

Investigators say they found no apparent sign of a struggle in the living room where Charlie Rogers, 33, said she was attacked, and an FBI forensic pathologist concluded that Rogers either cut herself, or allowed someone else to do it.

The alleged attack led to a swift response from Lincoln's gay, lesbian, bisexual and transgender community, which rallied that weekend outside the state Capitol in Lincoln.

Rogers, a former member of the University of Nebraska's women's basketball team, told police the men broke into her Lincoln house July 22 and attacked her. Rogers, a lesbian, said one man pinned her down while another sliced a cross into her chest, cut the front of her thighs and shins and carved derogatory words in her arms and abdomen. She claimed they then rolled her onto her stomach and cut her buttocks, the back of her thighs and the back of her right calf.

Police found a pile of clothes, white knit gloves and a red box cutter on the living room floor. Rogers said the gloves did not belong to her, but investigators determined that a lot of the DNA inside them belonged to her.

No one responded to a message seeking comment left at a phone number listed as Rogers'.

Making false statements to a police officer is a misdemeanor, punishable by up to a year in jail. Kelly said Rogers will be booked at the Lancaster County Jail.

"It is important not to focus on the actions of any single individual," the groups said in the statement. "As residents of Lincoln we must continue to bring our community together to declare that violence and hate are not the values of our city."