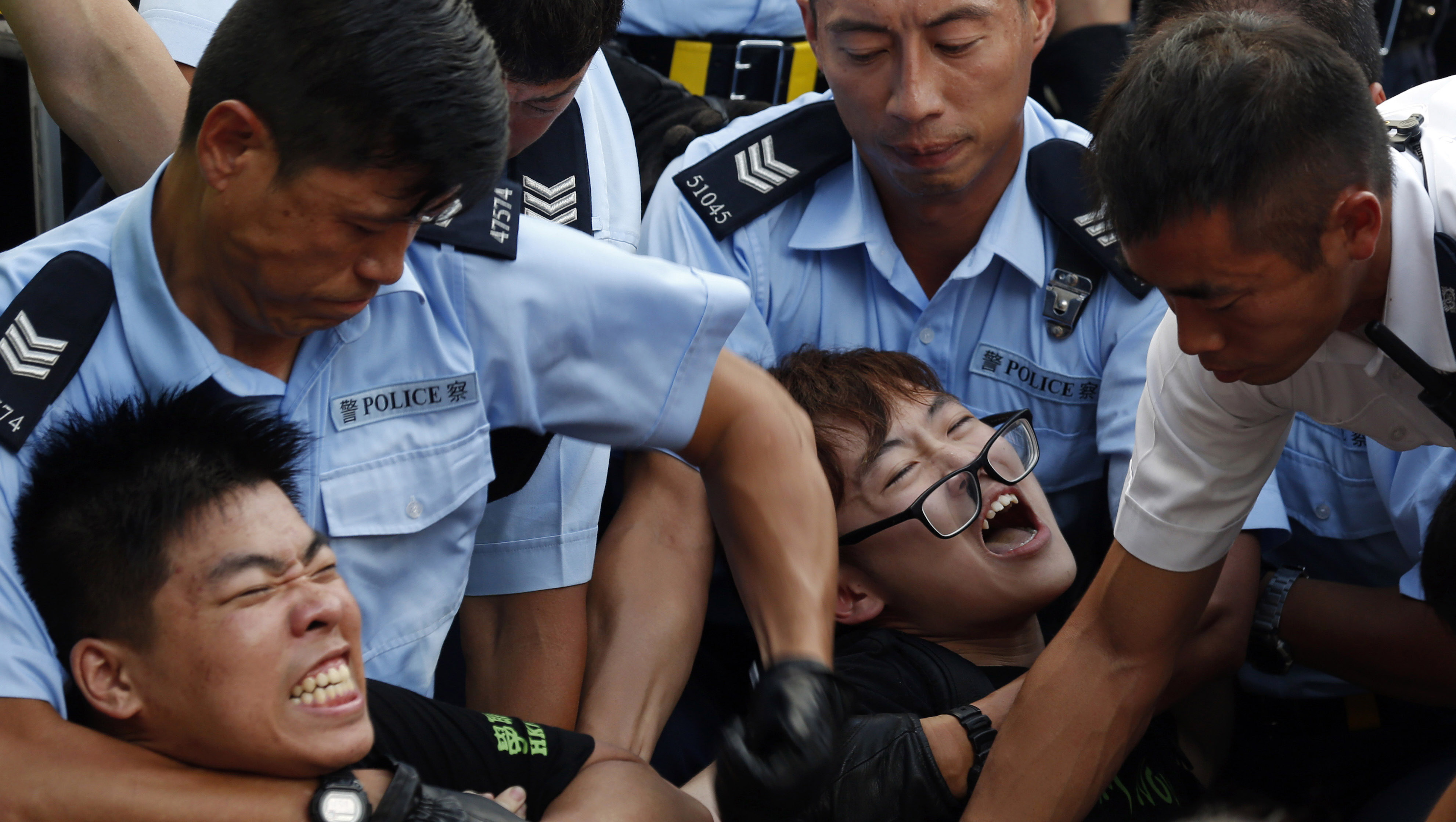 HONG KONG -- Police here arrested more than 500 people holding a sit-in a day after tens of thousands in the former British colony joined a massive march to push for democracy.

Anger at mainland China has never been greater after Beijing warned recently it holds the ultimate authority over the freewheeling capitalist enclave.

That's despite a mini-constitution that gives the city a high degree of autonomy until 2047.

Police said 511 people were arrested Wednesday for unlawful assembly and preventing police from carrying out their duties. They were holding an overnight sit-in after the rally.

Police said 98,600 people joined Tuesday's rally at its peak, while organizers said 510,000 turned out, the highest estimates in a decade. Hong Kong University researchers put the number at between 154,000 and 172,000.

The Reuters news agency says, "Hundreds of police forcibly removed kicking and screaming protesters" in what it says "could be the biggest challenge yet to China which resumed control over the former British colony in 1997."

Reuters adds that, "Many of the more than 1,000 protesters linked arms in a bid to resist efforts to remove them but they were taken away one at a time, in some cases by three or four police, as activists kicked, screamed and punched before being bundled on to buses."

The arrests came after the rally, when two student groups held a sit-in overnight to "occupy" a street in the city's financial district, vowing to remain until 8 a.m.

On Tuesday, peaceful crowds carried banners and posters urging democracy and filled half of a broad boulevard as they marched in sweltering heat and occasional rain through skyscraper-lined streets to the financial district. Thousands of police kept watch and ordered the city's iconic trolleys to shut down along the boulevard to reduce overcrowding.

Some protesters chanted, "Our own government, our own choice," while others called for Leung to step down.

Some groups along the protest route sang a Cantonese song based on "Can you hear the people sing?" from the musical adaptation of Victor Hugo's novel "Les Miserables." The song, with rewritten lyrics referring to universal suffrage, has become an anthem for Hong Kong protesters.

July 1, a public holiday marking the handover of Hong Kong from London to Beijing, has become an annual day of protest. This year a focal point for demonstrators' anger was a policy document, or "white paper," released last month by China's Cabinet that said Hong Kong's high degree of autonomy is not inherent but is authorized by the central government.

"After seeing the white paper's content, we should be worried," said Jeff Kwok, 28, an export firm employee waiting at the rally's starting point in Victoria Park, where six soccer fields and surrounding areas were jammed with people. "The central government, they're trying to tell the Hong Kong people that they are the host country and Hong Kong is just one of their regions. They're trying to tell us they have absolute power to rule us."

Kwok complained that Beijing doesn't respect the principle of "one country, two systems" under which Hong Kong is allowed to retain control over much of its own affairs.

Another protester, Kennie Chan, lamented that Beijing was less restrained now in exerting its influence over Hong Kong.

"In the past, it seemed like they were doing it step by step, but now, it's obvious that they cannot stand Hong Kong people. We are not obedient anymore, and are resisting more and more," said the 30-year-old, who works as a stage manager.

Ahead of the rally, one group of protesters burned a copy of the white paper outside a ceremony attended by officials to mark the handover.

The protest comes days after nearly 800,000 residents voted in an informal referendum aimed at bolstering support for full democracy. Beijing denounced the referendum as a political farce.

China's Communist leaders have pledged to allow Hong Kongers to vote for the city's leader by 2017. However, they've rejected calls to allow the public to name candidates, insisting instead that they be vetted by a Beijing-friendly committee like the one that has hand-picked all leaders since the handover.

Leung, Hong Kong's leader, tried to soothe tensions, saying in a speech that he'll do his "utmost to forge a consensus" on implementing universal suffrage on schedule. But the government later released a statement saying it is unlikely that public nominations will be allowed because it's legally "highly controversial."