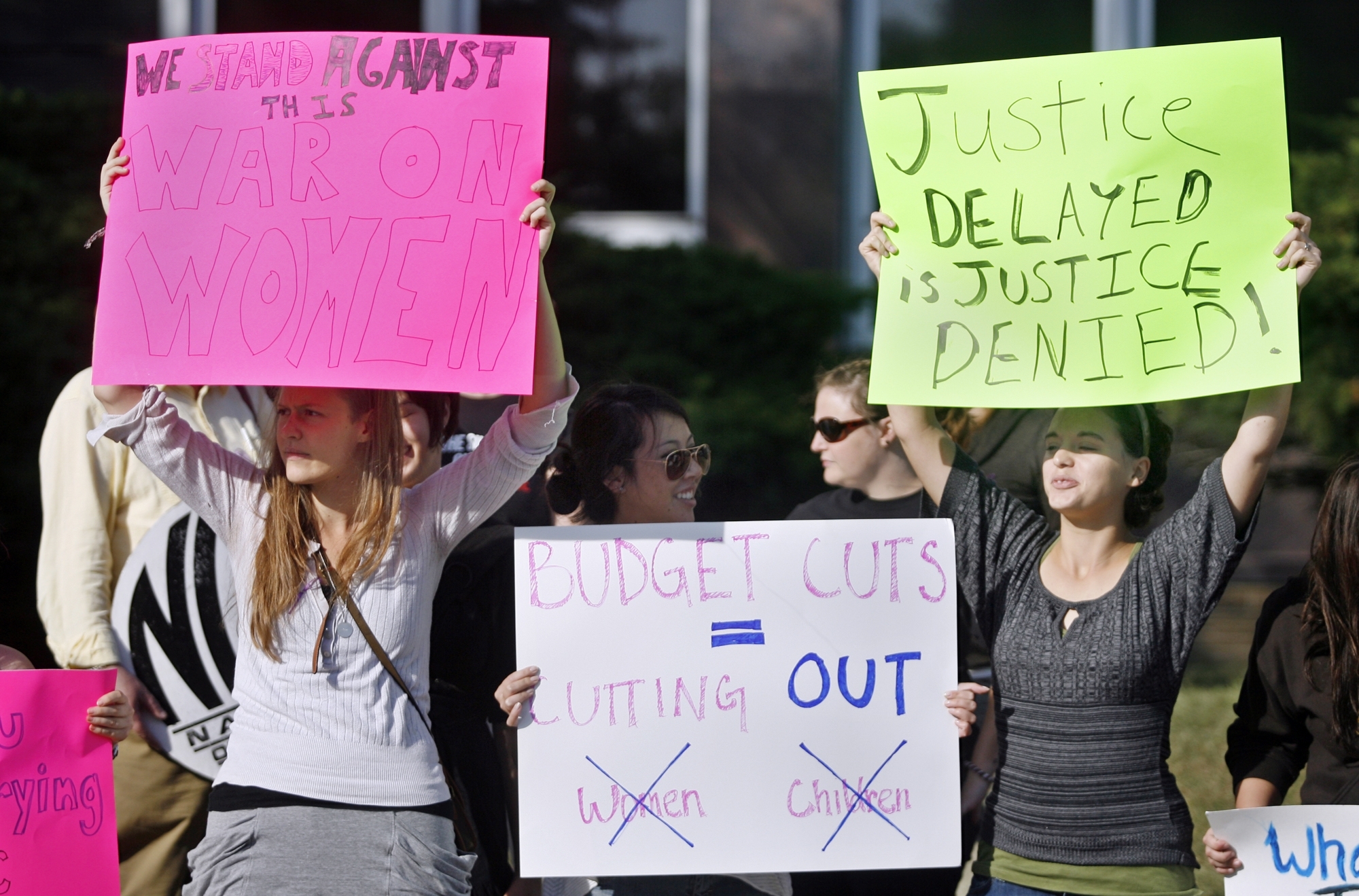 TOPEKA, Kan. - Over the past month, one by one, people suspected in domestic battery cases in northeast Kansas have been set free with no charges against them. Prosecutors say they're overwhelmed with felonies and, faced with budget cuts, can't afford to pursue the cases.

Busted budgets have forced tough decisions by governments and law enforcement officials nationwide, but the Shawnee County district attorney's move to stop investigating domestic abuse and other misdemeanor cases has angered victims' advocates who say austerity has gone too far.

The advocates are also outraged by the response from the capital city of Topeka, where the City Council and mayor repealed the city's domestic abuse law Tuesday night — a move designed to ensure the city wouldn't be stuck with the bill for prosecuting such cases.

"I absolutely do not understand it," Rita Smith, executive director of the National Coalition Against Domestic Violence, said after the vote. "It's really outrageous that they're playing with family safety to see who blinks first. People could die while they're waiting to straighten this out."

City and county officials are still hoping to strike a deal to end the budget dispute. Interim City Manager Dan Stanley said repealing the local ordinance "removes the ambiguity" and puts Topeka, the county's largest city, in a better position to negotiate.

Most council members put the blame for their situation on the county and emphasized that they want to resolve the impasse, not deny abuse victims protection.

But City Councilwoman Denise Everhart, who voted against the repeal, said: "I just ask everybody to consider the message we're sending."

Shawnee County District Attorney Chad Taylor has said he knew his decision would upset people but contends his hand was forced by the 10 percent cut in his budget for 2012, which he said will force him to lay off staff. He considered employee furloughs and "every angle" before making his announcement in early September.

His spokesman, Dakota Loomis, called the city's decision drastic and unprecedented but said Taylor would re-evaluate his position. The repeal doesn't end negotiations between city and county officials; "it just means there is a new dynamic in play," Loomis said.

Topeka has had at least 35 reported incidents of domestic battery or assault since early September. Those cases are not being pursued, and as of last Friday, 18 people jailed have been released without facing charges, according to Topeka police. Prosecutors and police have refused to discuss details of the cases out of concern for victims' privacy, making it difficult to assess in what situations suspects aren't being prosecuted.

The use of a weapon in an assault or battery makes a crime a felony, which would be handled in state court.

Taylor's decision has prompted furious reactions nationwide, and county commissioners say they've received hundreds of emails in the past few days from people upset by Taylor's move and the city's response. Outside the Shawnee County Courthouse on Tuesday, about two dozen people carried signs protesting the moves.

"It can't continue like this. They have to be prosecuted," said County Commissioner Ted Ensley, a Democrat. "Supposing they're charged and they're not prosecuted and it ends up they go back and cause a death of a woman or a child."

In a memo, Taylor's office said budget cuts would force it to drop its prosecution of misdemeanors occurring within Topeka's city limits and "of greatest concern are domestic violence cases."

Topeka officials feared the city's ordinance against domestic violence could have forced the city to take over prosecuting cases and file them in its municipal court. Local officials said Topeka couldn't handle the $74-a-day cost per inmate of renting space from the county to jail several hundred suspected abusers or hiring additional staff to handle prosecutions.

The city already handled misdemeanor cases of simple assault and battery, and incidents of assault or battery against its police officers. Domestic assault or battery involves a person in the same household, and victims often need additional services or shelter.

City Council members who voted to repeal said the moves would help victims by ensuring such cases are prosecuted in state court.

For years, the city and county agreed that the district attorney's office would handle domestic violence prosecutions in the better-funded state courts. City officials also note that the county has more services for victims and runs the jail.

As in other places across the nation, state and local governments in Kansas are struggling to balance their budgets and find new revenue. Earlier this year, Republican Gov. Sam Brownback won big cuts in general aid to public schools and eliminated state funding for arts programs while forestalling any effort to raise revenue through taxes.

"No one wants to make these cuts in essential services, but that's where we're at," said Gregory Minchak, a spokesman for the League of Cities.

Cities including Cleveland and Sacramento, Calif., for example, have laid off police officers. And in many Midwestern states, sheriffs have stopped busting meth labs after federal money aimed at cleaning up the crime scenes ran out.

The current budget for the Shawnee County district attorney's office is just under $3.5 million, and would drop to a little more than $3.1 million in 2012 under the spending plan county commissioners adopted in August. Taylor said the cuts imposed by the commission would force him to lay off 11 of his 63 staff members.

County commissioners said Taylor decided independently not to prosecute misdemeanor cases, and that all county departments are taking cuts.

Advocates for abuse victims are irritated that officials couldn't resolve the dispute. Advocates see plenty of examples of dwindling resources for courts, services and law enforcement. But publicly backing away from prosecutions or repealing an ordinance to avoid potential costs?

"People all over the country are amazed that they're even having this conversation," Smith said.