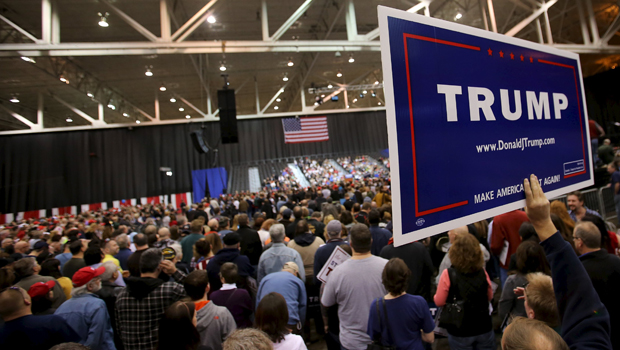 It was the photograph seen 'round the nation -- and the internet -- by Saturday morning: a gray-haired woman, sporting a Donald Trump t-shirt and raising her right arm, fingers outstretched in a Nazi salute.

The photograph led the coverage of the Chicago Tribune the night of Trump's chaotic Friday rally, and the newspaper's post on Twitter showcasing the Trump supporter was re-tweeted nearly five thousand times.

For many, it seemed a terrifying distillation of the Trump event. The picture of the woman, identified as 69-year-old Birgitt Peterson of Yorkville, Illinois, was interpreted as another sign of Trump's growing extremist support -- on top of his endorsements from white supremacist leaders.

But in an interview with the New York Times on Saturday, Peterson -- who was born in West Berlin in 1946 and became an American citizen nearly four decades later -- denied that characterization.

Instead, she explained that she was merely mocking those protesters who had compared the front-runner's rise to Nazi Germany's Adolf Hitler.

"They said Trump is a second Hitler," she told the Times, recalling that one activist next to her that night had held aloft a photo of the Nazi leader. "I said do you know what that sign stands for? Do you know who Hitler really was?"

"I make the point that they are demonstrating something they had no knowledge about," she said. "If you want to do it right, you do it right. You don't know what you are doing."

It was then that she gestured in a Nazi salute.

One protester, captured in the photograph to the left of Peterson, had a different interpretation of events. In a Facebook post, Michael Garza said that he was trying to clear a path for the woman in the tense crowd: "I start to clear the path. I walk right up to her and say, 'Ma'am we have listened to you. We understand this is all a little wild, but we have cleared a path for you to leave.'"

"My right hand was constantly swinging in motion, showing her the path out we made for her," Garza wrote. "She goes, and I quote, 'Go? Back in my day, you know what we did-' Bam. Hail's Hitler."