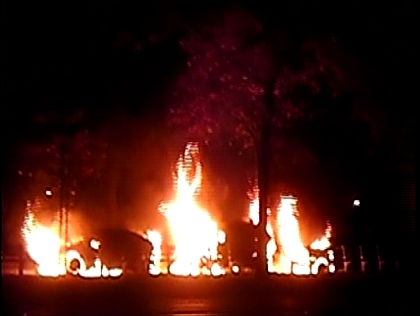 (CBS/WCBS/AP) NEW YORK - Peaceful marchers sent a clear message Sunday to vandals who torched cars and scrawled Nazi swastikas in an Orthodox Jewish neighborhood of Brooklyn where Woody Allen was raised: Don't repeat the kind of attacks that once led to the Holocaust.

About 100 Midwood residents joined elected officials for the walk past four public benches from which 16 swastikas had been removed after the pre-dawn attack Friday.

"It was horrible," 17-year-old Jewish student Ascher Scheiner told CBS station WCBS. "My friend woke me up and said he heard a loud explosion."

Police say three parked cars - a BMW, a Lexus and a Jaguar - were set ablaze. In addition, the letters "KKK" were spray-painted on a van and anti-Semitic messages were scrawled on a sidewalk.

State Assemblyman Dov Hikind, a Democrat who represents the area, said authorities told him they believe rags were soaked in gasoline, placed under the cars and lit.

"I've never seen this level of violence here, in my 29 years representing this area," Hikind told The Associated Press. "This goes beyond the pale -- blowing up cars in the middle of the Jewish community."

Police made no arrests as of Sunday afternoon. The NYPD Hate Crimes Task Force is investigating.

According to WCBS, Brooklyn District Attorney Charles Hynes said dozens of empty beer bottles were also found at the scene. He said they would be tested for fingerprints and DNA samples.