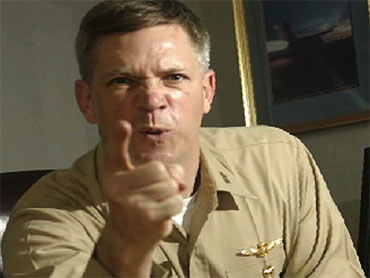 NORFOLK, Va. - A Navy admiral on Thursday recommended letter of censure for an officer who produced and broadcast raunchy videos to thousands of sailors aboard the USS Enterprise.

The head of U.S. Fleet Forces Command, Adm. John Harvey Jr., also recommended that Capt. Owen P. Honors Jr. should have to show cause for why he should remain in the Navy.

"Navy leaders are not popular entertainers but professionals vested with extraordinary military authority who must be held to a higher standard," Harvey told reporters.

Honors was the aircraft carrier's No. 2 officer when he helped produce and appeared in the series of videos that aired between 2005 and 2007 on the ship's closed-circuit TV station during weekly movie nights. He was relieved of command this January after Navy leaders learned about the videos from media reports.

It would have been five other officers, but Rear Adm. Ray Spicer had already retired, Martin reports.

The censure letters have the potential to hinder the officers' careers.

The Navy's investigation of the videos found that Honors had produced at least 25 videos with inappropriate scenes. The videos, produced on the ship and broadcast to the crew during deployments between October 2005 and December 2007, included anti-gay slurs, sailors of both genders in shower scenes and salty language.

Many sailors aboard the ship when the videos aired have since said they were intended to be humorous and maintain morale on long deployments.

Harvey said in January the videos showed a profound lack of judgment when he moved Honors into an administrative job at Naval Station Norfolk.

The Navy said its investigation has focused on all aspects of the production of the videos, including the actions of other senior officers who knew about the videos and what actions they took in response.

Honors' civilian attorney, Charles W. Gittins, has said that if Honors had been told to stop producing and broadcasting the videos, he would have done so.

While many sailors under Honors command have defended him, Harvey disagreed.

"Vulgar language and insensitive and sexually tinged attempts at humor such as that displayed in the Enterprise videos is now an everyday part of our popular culture, and endless examples can be found on cable television and the movies," Harvey said in a statement.

"Recognizing this fact of life, some have questioned the actions I have taken thus far and have also characterized the videos as harmless attempts to raise crew morale during a period of demanding operations.