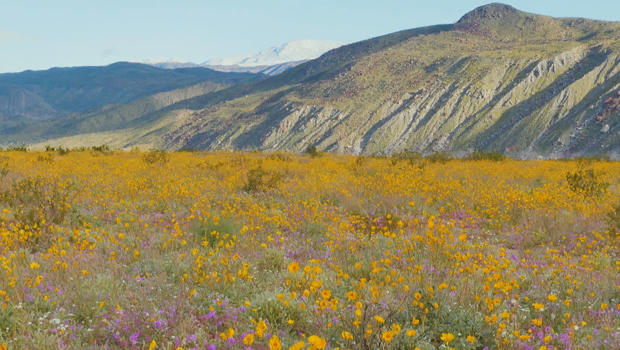 California has been in the news a great deal recently with record droughts, unprecedented wildfires and major floods. Thankfully, those are over, and the state is experiencing what may be the best super bloom in recent history.

After nine long years of drought the skies finally opened to produce good winter rains and mountain snow, which have now turned the state, especially the southern end, into a carpet of flowers – explosions of blooms that are so large they are known as "super blooms," and can literally be seen from space.

California isn't the only state with super blooms; there are others, and if conditions are right, Arizona is one of them.

The flowers in Arizona are widespread and stunning this spring, especially the poppies.

Texas also has wide expanses of spring wildflowers, in part due to the dedication of Lady Bird Johnson, the wife of President Lyndon Johnson. She worked to make U.S. roadsides more attractive and was probably behind her husband's proposal that became the Highway Beautification Act, which was passed by Congress in 1965. Because she was a Texan she had a major impact on the Lone Star State. Her legacy remains today with the vast expanses of bluebonnets, Indian paintbrush, wine cups and other flowers planted years ago along roadsides, especially in central Texas.

In 1982 Lady Bird and Helen Hayes founded The Lady Bird Johnson Wildflower Center, which has grown from a few acres of Texas native flowers to a vast expanse of native plants from all over the U.S. According to a staff member, "The Center has achieved great success since its founding, evolving from a private nonprofit research organization narrowly focused on Texas wildflowers to a major botanic garden and research unit of the university [of Texas] known for plant conservation, landscape restoration and sustainable approaches to landscape design. The Center is making a difference for the health of the planet through its research, demonstration projects, education programs and the development of national-scale programs to promote sustainable landscapes."

As Lady Bird said, "Our Center works for more than the lovely blossoms in our open spaces. We are concerned for all of North America's native plants, from the smallest sprout to the tallest tree."