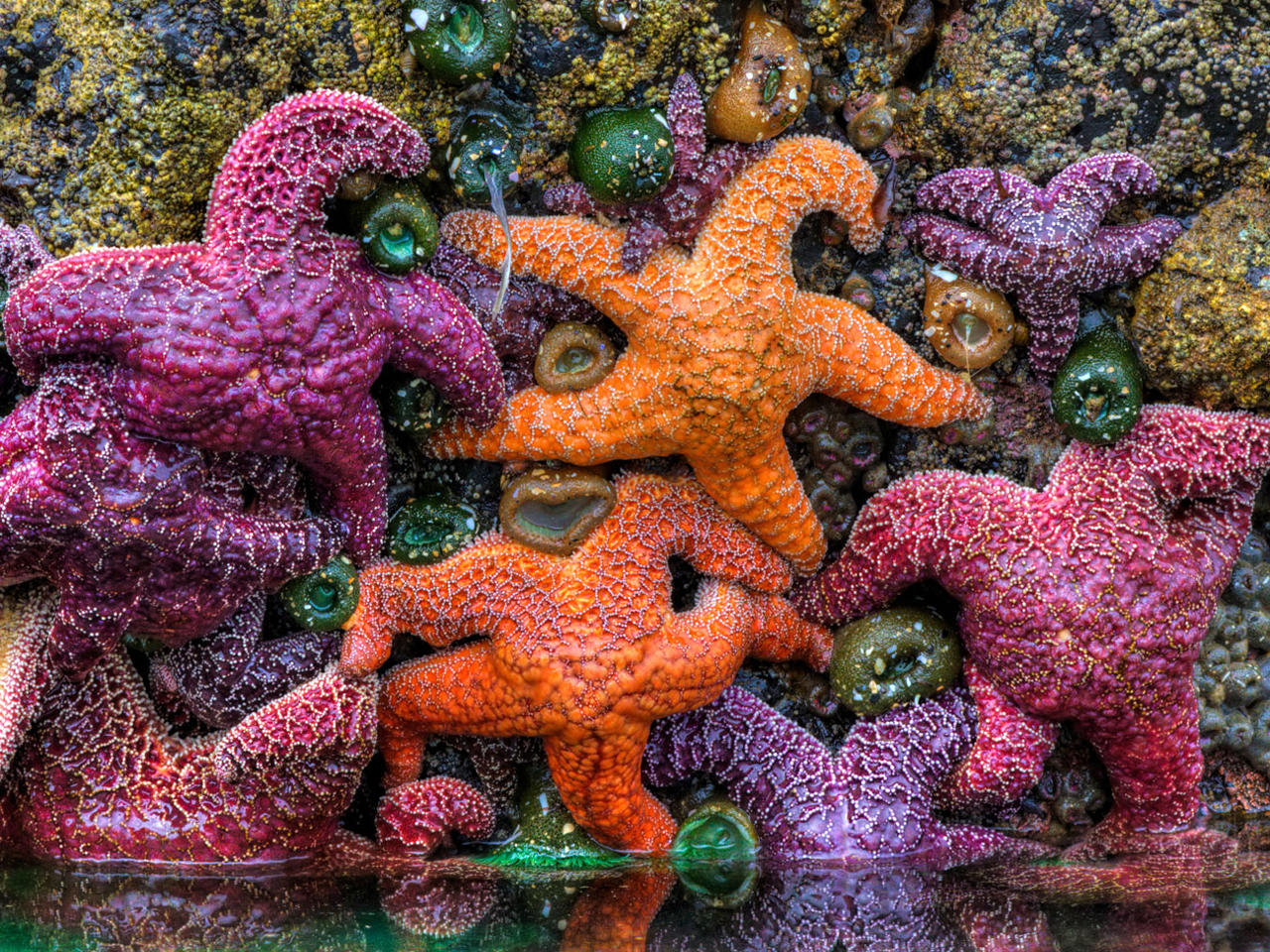 An intertidal zone is the area where the ocean meets the land. It is referred to as intertidal because it is between high and low tide lines. The intertidal zone is a really tough area in which to live, but it does have its rewards. Animals who live there must be able to withstand dry times when the tide is out and they have to be tough enough to survive waves repeatedly pounding them. The reward for being tough is that those waves bring in nutrients and lots of oxygen.

In 1963 an ecologist, Robert Paine, went to an intertidal pool on the Pacific Coast and, along an eight-meter stretch, began ripping starfish off rocks, and throwing them as far as he could out into the ocean.  He repeatedly returned to the same area to remove all of the starfish while leaving a nearby area intact.

Before he started throwing starfish, Paine inventoried his study area and found 15 species of invertebrates living there. After only three months he could see the starfish-free community was changing.  Acorn barnacles covered more than 60 percent of the space. After a year, the acorn barnacle population had been crowded out by fast-growing mussels and goose barnacles. Also, two limpet species, and two species of chitons were gone, along with a big decline in the number of sea anemones and sponges. What had been home to 15 species now contained only eight. The lack of starfish had dropped the species diversity by almost 50 percent in one year.

Starfish are predators. On their underside they possess “tube feet” along their arms, which allow them to move and capture prey. Tube feet function by adjusting the amount of water inside the tubes allowing starfish to exert tremendous suction. Because their tube feet utilize water, rather than muscles, they don’t get tired and therefore can pull a clam or mussel open. They then evert their stomach into the clam and have dinner. They are superbly adapted predators.

The results of Paine’s starfish tossing caused him to coin the term “keystone species.” If the keystone in the top of an arch is removed the arch will fail. If a keystone species is removed from an ecosystem, the number of other species will decline. Starfish are a keystone species. The decline of this top predator, which normally controlled the number of barnacles and mussels, caused the decline of other species that were eaten by the newly-increased population of barnacles and mussels.

A food or energy pyramid shows how such a trophic cascade can happen. The base of a food pyramid is the producers, such as grass, seaweed, potato plants, algae and all other chlorophyll-containing organisms which can convert sun energy into stored chemical energy (calories) in new plant tissue. The next step in the pyramid is the primary consumers that eat the plants. Primary consumers store about 10% of the energy in their new tissues, while about 90% is converted to waste heat. Each step results in about 90% or more of the energy being converted to waste heat, which is why food chains are short.  After three or four steps there is little energy left, as most of it has been radiated as heat into outer space.  As a result the predators at the top are few in number, and the results of removing them cascades down through the food chain.

Paine’s relatively simple experiment changed the way ecologists learned about the complexities of ecosystems, and we are still learning. We now realize there will be big, long-lasting consequences when predators are removed from an area. It is true in the Hill Country of Texas, where white-tail deer left unchecked have reduced native plant populations. On the north side of the Grand Canyon, mountain lions, wolves, coyotes and bobcats were removed in the early twentieth century, causing a big increase in the mule deer population, which led to seriously over-browsed vegetation. We can also see what happens when predators are returned to an environment, such as when wolves were returned to the Lamar Valley in Yellowstone in 1995. In less than 20 years their return has resulted in more willows and cottonwood trees, because elk spend less time on the valley floor, and now beavers live along the Lamar River. There are also more aspen trees in the valley.

Everything in nature truly is connected to everything else.