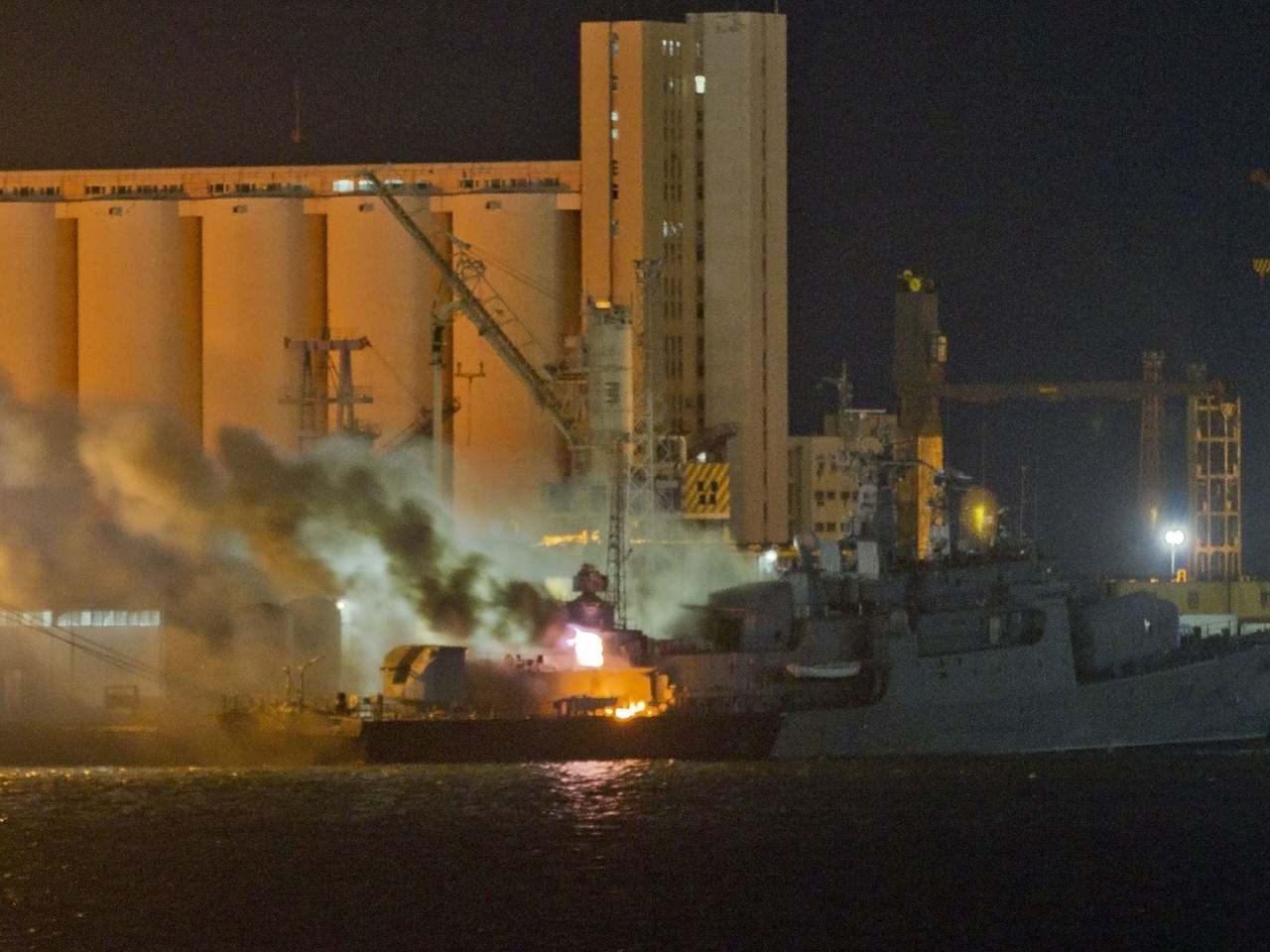 TRIPOLI, Libya - NATO fighter jets struck three ports in bombing runs overnight, targeting Moammar Gadhafi's navy in an effort to protect the nearby rebel-held port of Misrata, NATO said Friday. It was the broadest attack on Libya's naval forces since the alliance joined the conflict.

One bombing run hit the main port of Tripoli, where reporters could see flames and smoke rising above the stricken warship into the night sky. Other targets were the Khoms port, between Tripoli and Misrata, and Sirte, east of the city.

In Brussels, NATO confirmed that its warplanes targeted the ports and accused Libya of using its ships in the escalating conflict, including attempts to mine the harbor in Misrata. Rebels trying to end the nearly 40-year rule of Libyan leader Moammar Gadhafi have been struggling to hold Misrata against repeated attacks by Gadhafi's forces.

British Maj. Gen. John Lorimer, a communications officer, said British warplanes hit two Libyan corvette warships in the Khoms harbor and "successfully targeted a facility in the dockyard constructing fast inflatable boats, which Libyan forces have used several times in their efforts to mine Misrata and attack vessels in the area."

He said the port was the nearest concentration of regime warships to the port of Misrata, which Gadhafi has repeatedly attempted to close to humanitarian shipping.

Mohammed Rashid, general manager of the Tripoli port, told reporters the coast guard boats were used to patrol Libyan waters for immigrant boats trying to make it to Europe and for search-and-rescue activities.

The port official said some damage was done to the port, but it was minimal. A government official later said he feared the NATO strike would discourage ships from using the Tripoli port, reducing imports and driving up the cost of basic goods for Libyans.

In a tour given to reporters at a distance from the area, a warship could be seen on fire, with flames and plumes of smoke rising from the stricken vessel.

"Given the escalating use of naval assets, NATO had no choice but to take decisive action to protect the civilian population of Libya and NATO forces at sea," he said.

"NATO has constantly adapted to the rapidly changing and dynamic situation in Libya and at sea," he said in a statement.

In Brussels, NATO played video clips from the jets' gun cameras showing the bombing of two frigates and a port facility.

The two frigates, a Soviet-built Koni class anti-submarine boat and a French-built Combattante class missile craft, were moored at the dock when they were hit with laser-guided bombs. It was not immediately clear whether their crews were aboard when they were struck.

"Our aim was not to destroy these ships but to remove their military ability," NATO spokesman Wing Cmdr. Mike Bracken told reporters. "They were identified as legitimate and legal targets."

But Bracken declined to say whether the frigates had been used in any naval operations — such as the mining of Misrata port — in recent weeks. He said NATO has "meticulously communicated" to all government troops that the risks of being around military equipment were extremely high.

NATO is operating under a U.N. mandate to maintain a no-fly zone over Libya and to prevent attacks on the civilian population.

The Western coalition has stepped up its airstrikes in the Libyan capital in an apparent attempt to weaken Gadhafi's chief stronghold and potentially target the leader himself. The Gadhafi family compound, Bab al-Aziziya, has been targeted several times.

Also, a NATO strike early Friday hit a police academy in the Tripoli neighborhood of Tajoura, a government official said.

The airstrikes came a day after Gadhafi's forces rocketed the strongholds of rebel fighters in the strategic mountain heights southwest of the Libyan capital.

The two sides appeared to be fighting for control of the two highways to the north and south of the Nafusa mountain range, which slices across the desert south of Tripoli to the western border with Tunisia, controlling a key border crossing.

Libyan government spokesman Moussa Ibrahim told reporters at a late-night news conference Thursday that in a meeting earlier this week with Russian leaders, an envoy offered to withdraw Libyan fighters from cities as part of a peace deal, if rebels do the same.

"We are even prepared to go as far as withdrawing our army from all Libyan cities and population centers," he said. "This is a new offer."

Ibrahim said the offer was the farthest the government had gone since fighting broke out against the rebels. He said as part of the deal, NATO would also have to halt its strikes of Libyan targets.

There was no immediate comment by rebel leaders based in the eastern city of Benghazi. Up to now their main demand has been the removal of Gadhafi and his sons from power.

An international aid group said Friday that 3,800 Chadians who fled fighting in Libya were stranded in a remote desert town in northern Chad.

The International Organization for Migration in Geneva said the migrants have little food or water, and dozens are sick or injured.