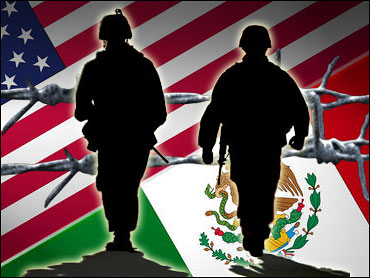 More than 50 National Guard troops have arrived in Arizona to begin their new mission along the Mexican border, the first troops to deploy under President Bush's plan to crack down on illegal immigration.

They will perform duties that will free up immigration agents, allowing them to focus on enforcement along the border. The Guard members are not expected to perform significant law enforcement duties.

The troops arrived in Yuma on Saturday and were briefed Sunday on their mission, the duties of the U.S. Border Patrol and given tips on staying hydrated in the triple-digit heat of the Arizona desert.

Under President Bush's plan, up to 6,000 National Guard members are to be sent to the four southern border states. Officials say 300 Guard soldiers from Arizona are expected to begin arriving at the state's border in mid-June.

For millions of illegals in the U.S., sneaking across the border is something that never really happened.

They came across quite legally – with visas – but when those documents expired, they didn't go home as they were legally required to do.

The little-acknowledged reality is that nearly half the estimated 12 million undocumented foreigners in the United States entered on bona fide U.S. visas - and simply never left. Authorities call them "overstays" who have been largely overlooked in the vitriolic debate on immigration.

"The southwestern border gets all the attention, but it's staggering the number of people who come and overstay their visa," said Dean Boyd, a spokesman for U.S. Immigration and Customs Enforcement in Washington. "It's a very large-scale problem."

A study by the Washington-based Pew Hispanic Center last month indicated that 45 percent of the undocumented migrants in the United States overstayed legal visas.

Confirming those findings or knowing the home country of those who overstay their visas is tricky because U.S. authorities don't track the problem. Immigration authorities also generally don't compare entry and exit information to see who should have left the country.

"There's no annual reports published on visa overstays because obviously these people are hiding and don't want to be found," Boyd said.

Ana Luisa certainly doesn't, so she asked that her last name not be used. The Mexico City native lives in Dallas with her husband, 13-year-old son and 5-month-old daughter - who was born in the United States and is an American citizen - and volunteers at a middle school.

When she moved to the United States, she made sure to return to Mexico every six months to renew her tourist visa. But the trip soon became a chore and she let her visa lapse a year ago. Now if she returns to Mexico again she likely won't be able to get another U.S. visa.

"I'm illegal, but I'm someone who is trying to help with my work," she said in a phone interview.

Ana Luisa said she would never have sneaked across the border to get into the United States, and didn't see the harm in overstaying her visa. In Dallas, she said, her son is able to get a better education than he would in Mexico.

"I wouldn't risk my life in the river or in the desert like thousands of others do," she said.

Many borrow the social security numbers of legal residents or use falsified documents to build what appear to be legal identities, making it difficult for employers to know when someone is undocumented. Others work informally, as maids, gardeners or in other jobs where employers rarely require paperwork, despite federal law.

The immigration reforms soon to be hashed out in a Congressional conference committee may crack down on employers who fail to make sure their workers are legal. But it's unclear whether the proposed reforms will send many "overstayers" home.

The U.S. State Department issued nearly 5.4 million temporary, nonimmigrant visas in fiscal year 2005, and about 17 percent went to Mexicans. The most common visas are for tourism, business travel and medical care.

Boyd said he couldn't pinpoint the type of visa that is overstayed the most. Thousands of foreigners who come as students remain in the United States after finishing school or dropping out, and many who come on work visas lose their jobs or stay after their papers expire.

Of course, getting a visa in the first place is a challenge. Lines at the U.S. Embassy in Mexico City form before dawn. Applicants pay $100 for an appointment, bringing proof of employment, savings and family and community roots.

"The main thing is you have to have sufficient ties to your home country to show you are coming back," she said. "The law - not just for Mexico but everywhere - says that the burden is on the applicant to prove they aren't going to stay. In some cases that's very difficult, especially if you have a lot of family in the U.S. and you don't own property or have money in a bank at home."

Ricardo Ortiz, 55, said visitors who overstay their visas have made it harder for honest people to get visas in the first place. For each of the past 10 years, he has spent nine months working legally at a Long Island racehorse farm.

"Those who are working there and don't have papers are making trouble and holding up our visas," he said, waiting for his Embassy appointment in Mexico City. "We are legal workers, and we are being unfairly hurt."

Nasario Perez, 36, spent three hours on a bus to get to his embassy appointment. He hoped to take a landscaping job in New York state, but said there was no way he would overstay his visa.

"If I do good work and then leave, I will have a chance to get a visa the next time," he said. "That's more important than extra money I could make by staying too long."