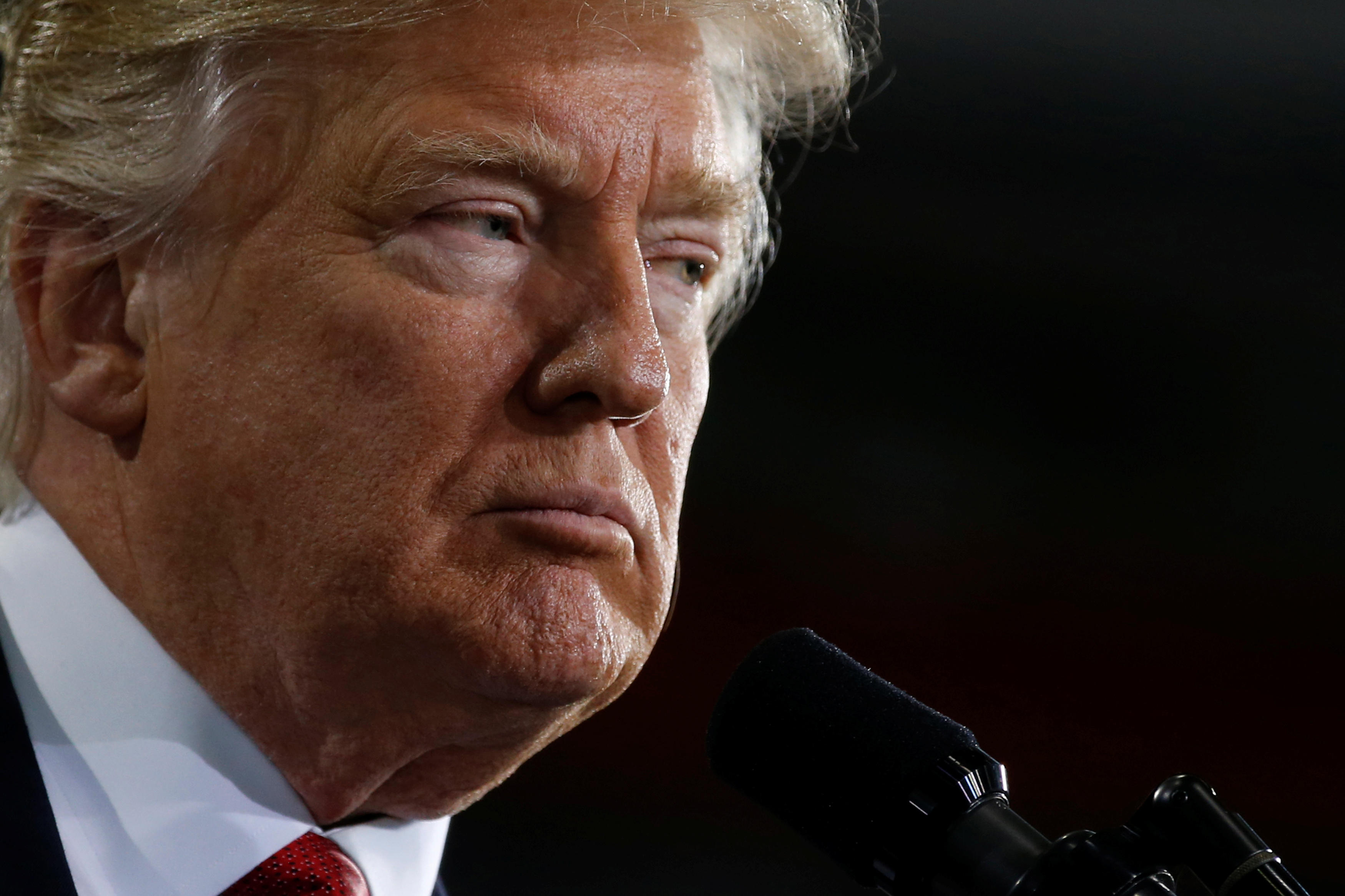 Here’s something Americans agree on: they think President Trump is trying to do a lot – though it’s too much for some. Whether they like it all is a different matter, of course. And a lot of activity has meant there are a lot of things for supporters to cheer...and for opponents to dislike.

His strongest backers like just about all they see – “this is what I voted for,” they say – though they’re notably not yet sold on the health-care bill. They turn to Mr. Trump for accurate information over other sources, believe he was wiretapped, describe him as “focused” and that he makes them feel “confident” in him.

Good economic news has helped the president hold on to softer supporters who remain optimistic, despite their concerns on other fronts. But the ranks of his supporters have held steady from last month, having neither grown or shrunk.

Meanwhile the GOP health care proposal has put off some potential Trump backers, who like what he’s doing on the economy and would have him focus more on that, but describe themselves as “nervous” (in particular, those who don’t like the bill), as many also see the president as “distracted” or “temperamental.” They have not joined the ranks of supporters. And his steadfast opponents, despite pessimism, say they’ve found motivation to do things in opposition to his policies.

All his supporters want him to be something of a Dealmaker-in-Chief as Congress takes up his legislative agenda, and they’d have him stand apart from his own Republican party if needed. They urge him to make “good deals” that help them and be his “own kind of president,” whether it fits the Republican party’s conservative views or not. The bulk of his strongest supporters are Republicans themselves, so this sentiment echoes the sort that has long bolstered Trump, dating all the way back to last year’s primaries, when he ran against the so-called Republican establishment.

And few things differentiate Trump supporters more from non-supporters in this study than whether Americans feel he is an accurate source of information. His strongest backers overwhelmingly say he is. Almost none of his non-supporters – including those who’d consider supporting him – agree.

The types of support and opposition

The public’s evaluations of this presidency are very personal, reflecting how people feel about Trump himself, and not just his policies. The overall size of the support and opposition groups hasn’t really changed since last month.

In this study we’ve been defining the strongest backers (the “believers,” for their strong belief in what he will do); those who support him but with the condition that he deliver on his promises (the “conditionals”); and those watching for a reason to support him but do not now (the “curious”);  and those who oppose him, period, the “resisters.”

The Believers give him credit for the recent economic gains. If he’s stymied as he pursues his goals, it’s only because of a politically-motivated opposition.  When he’s faced with disagreement, they’re the most likely to want him to take his case directly to the people. They say the Congressional Budget Office (CBO) does not do accurate, non-partisan work.

And on the legislative front, they trust Mr. Trump overwhelmingly to do what they consider the right thing -- more than they do Speaker of the House Paul Ryan.

The president’s more “conditional” supporters remain with him and see the economy improving – which is what they want the most – and they remain optimistic overall. Even those among them who worry the president is either “distracted” or unfocused, still point to the economic reports as helping their view of him. They’re on board with most of Mr. Trump’s other policies, though they’re somewhat more likely than the believers to describe what they’ve seen so far as a mix of things they want and things they don’t. They liked his address to Congress, but they’re more mixed on the House health-care bill, and most are waiting to learn more about it. They’re far less likely to believe Mr. Trump was wiretapped.

Those on the fence about Mr. Trump – not supporting him, but who say they might someday (we call them “curious”) – are staying on that fence for now. They haven’t become supporters. The health-care bill and his deportation policies have put them off – most say it’s made their view of him worse. So while they’re also glad for the good economic news, they report being “nervous” about the president’s approach, feeling he is “distracted,” trying to do “too much at once,” and even “temperamental.” They don’t like his tweets much at all. They are generally not trusting of either left- or right-leaning information sources, nor of either party in Congress or the administration.

The president’s strongest critics, whom we’ve labeled “resisters” in the NationTracker for their expressed steadfast opposition to him, not only disagree with his policies but also describe him as “distracted” and “divisive,” and they want him to make deals with other Republicans, if only to listen to other voices, though they trust neither him nor Speaker Paul Ryan.

In all, the president’s total support is essentially unchanged from last month, with the number of staunchest supporters (the believers) at 21 percent and conditional supporters at another 22 percent (each was 22 percent in February) – a portrait of a nation that remains firmly split not just on the president, but also on how to evaluate him.

One place where Trump’s strongest supporters are not all-in for his policies is on the proposed health-care bill. The “believers,” while relatively the most optimistic about the bill among those who have an opinion, largely adopt a wait-and-see approach. They do expect it to benefit just about everyone – young and old, middle-class and poor – but most don’t think it will affect them personally. They themselves tend to be older, and nearly half report that they are currently on Medicare or Medicaid.

Many of the curious think the bill will make things worse for them (43 percent), while most of the “conditionals” don’t expect it to change things for them personally. Over one-third of the “curious” are on Medicare or Medicaid.

Most of the curious say that the president’s health-care plans have made their view of him worse, and many say the Trump administration’s actions on health care have gone too far. Moreover, among the curious who do oppose the bill, most describe themselves as pessimistic about the Trump presidency overall. By contrast, the curious adopting a wait-and-see approach to the bill describe themselves as nervous, but not pessimistic – all suggesting the bill could be entwined with his broader ability to grow support for his presidency.

Among people who are strongly against President Trump, the “resisters,” 71 percent already oppose the new health care bill. They say it is likely to make things worse for the poor (86 percent), older Americans (83 percent), and women (82 percent) generally, and 61 percent feel it will hurt them personally. More broadly, resisters overwhelmingly view healthcare as a right that all people deserve, regardless of what they can afford.

This edition of the NationTracker finds the president’s strongest backers not only looking for, but listening to, very different sources than other Americans. The president’s strongest backers say they rely on President Trump and Vice-President Pence (nine in ten do) even more than any other sources we asked about, including right-leaning websites and broadcasts, to give them accurate information about what’s going on. His more conditional supporters also turn to him for accurate information, just to a slightly lesser degree, and all his supporters say the mainstream media is inaccurate. About nine in ten of the strongest supporters also reject information coming from Democrats in Congress, left-leaning news sources, and the mainstream media as inaccurate.

While just a quarter of Americans overall believe the president was wiretapped, the charge is accepted by two-thirds of his strongest supporters.  Conditionals say it’s too soon to say, though those with a view are more likely to believe the charge than not.  Meanwhile, half of the Curious and a majority of Resisters reject the idea.

Are the Resisters more engaged now?

Resisters are those who say they are strongly against President Trump, period. They report feeling pessimistic and nervous with him in the White House and more than half now feel motivated to oppose him. More than four in ten are following news about politics and talking about it more than they were before the election.

Still, four in ten did not vote in 2016, and the non-voters in this group are still less likely to be tuning in to political news or to have become more active since Mr. Trump’s victory.

Three in ten Resisters have become more engaged on social media by joining or following political groups. For some, it’s not just paying attention, but doing something to get involved. Nearly a quarter say they are donating more time or money to causes they support since Trump won, and about one in five – although low overall - report attending more town halls and rallies in person.

But they are not especially enthusiastic about what the Democrats in Congress are doing, either.  More than half of Resisters say the Democrats are not being effective right now, and most describe them as weak.

The Resisters’ opinions of the president and what he’s done so far remain extremely negative. More than eight in ten say Mr. Trump’s actions are what they voted against. Most describe the president as divisive, distracted, and temperamental. Few think he is unifying the country.  And nine in 10 don’t think the president is trying to earn their support. On policy, about eight in ten Resisters think the Trump administration has gone too far in its actions on the travel ban, immigration and deportation efforts, and changes to health care. Demographically, Resisters are younger than the groups supporting President Trump and more likely to be African-American or Hispanic. Nearly six in 10 identify as Democrats, and among those who voted, most backed Hillary Clinton.

For the NationTracker we interviewed 2,129 panelists, a higher than usual sample size, and balanced, among those who reported voting, between Trump voters and Clinton voters to the proportion from the election. The CBS News 2017 NationTracker is conducted by YouGov using a nationally representative sample of 2,129 U.S. adults between March 15-17, 2017. The margin of error for the full sample is +/- 2.7.