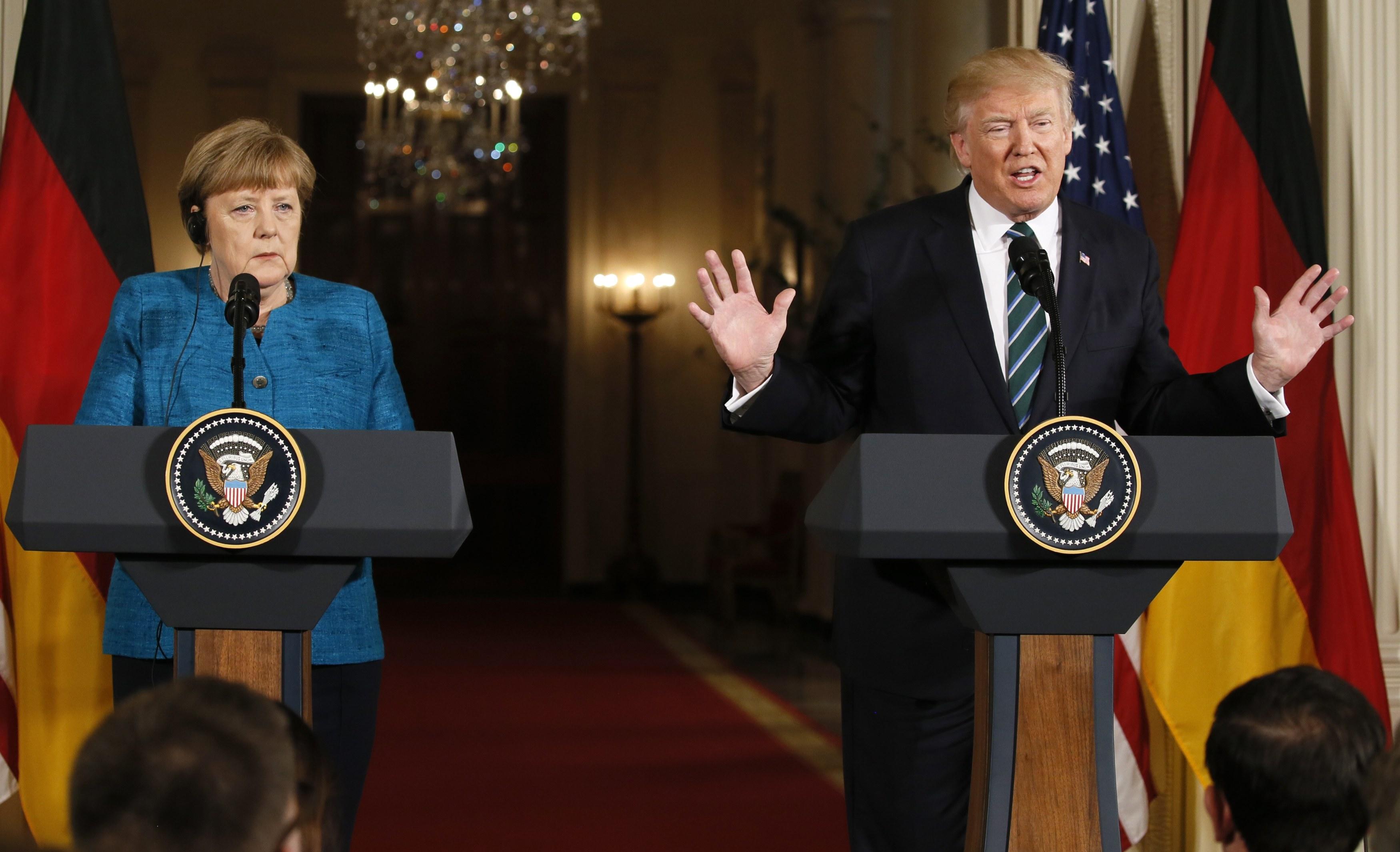 Mr. Trump was also asked about his claim that President Obama ordered the wiretapping of Trump Tower during the election. As far as wiretapping goes, he said, “At least we have something in common, perhaps,” as he motioned at Merkel. He was referring to a 2013 report, that was never proven, that claimed the NSA had tapped Merkel’s phone.

Mr. Trump then said that he never “made an opinion” on the allegation about Obama ordered the wiretapping of Trump Tower and that he was only quoting a “very talented legal mind” on Fox News.

“We said nothing. All we did was quote a certain very talented legal mind who was responsible for saying that on television. I didn’t make an opinion on it. That was a statement made by a very talented lawyer -- on Fox -- and so, you shouldn’t be talking to me. You should be talking to Fox,” the president said, referring to Fox News legal analyst Judge Andrew Napolitano.

Fox News anchor Shepard Smith, however, said that Fox couldn’t confirm Napolitano’s commentary, adding, “Fox News knows of no evidence of any kind that the now-President of the United States was surveilled at any time in any way. Full stop.”

During a meeting between the two leaders in the Oval Office beforehand, the press had asked for them to do a handshake, and when Merkel appears to say something to him about a handshake, but Mr. Trump appeared to either not hear her or ignored her. The awkward moment started to circulate on social media. Watch the end of the video here.

CBS News’ Emily Schultheis reports Friday’s meeting between Mr. Trump and Merkel will be watched closely on both sides of the Atlantic, particularly amid concerns that the new president’s “America First” rhetoric will reshape the longstanding close relationship between the United States and Germany.

Here’s the live blog of the news conference.

2:31 p.m. The president was asked about his claim that President Obama ordered that phones at Trump Tower be tapped during the election.

As far as wiretapping goes, he said, “At least we have something in common, perhaps,” as he motioned at Merkel. He was referring to a 2013 report that was never proven that the NSA tapped Merkel’s phone.

Mr. Trump then said that he never “made an opinion” on the allegation and that he was only quoting a “very talented legal mind” on Fox News.

2:27 p.m. Trump was asked about how unified the GOP is, and he said, “We have a very unified Republican Party.” He said it’s even more unified than during the election and that he’s had “the highest numbers” that he’s ever had in the party.

“With trade on Germany, I think we’re going to do fantastically well,” he said. “All I want is fairness. Germany has done very well in its trade deals with the United States.”

The president slammed NAFTA and said it’s been a “disaster” for the U.S.

He said that “our free trade” has led to bad things happening and that he is not an isolationist by any stretch of the imagination.

Merkel said they haven’t had time to talk at length about economic issues. She said freedom of movement within the European Union is very important. She said migration and immigration have to be worked on and giving refugees opportunities to shape their own lives where they are.

2:19 p.m. Mark Halperin asked Mr. Trump about healthcare and asked Merkel about Mr. Trump’s style. The president repeated that he met with a group of lawmakers who were against the GOP healthcare bill Friday morning, and now, he claims, are in favor of it.

“It’s all coming together. We’re going to have great healthcare. It’s going to be passed, I believe, and substantially, pretty quickly,” he said. “The press has covered it pretty inaccurately.”

Merkel said that people are “different” and have different ways of finding their way into politics.

2:14 p.m. Merkel said that they talked about “the international situation” and apprentice programs. She spoke about their shared interests and said Germany owes a lot to the U.S. because of its economic rise, thanks to the Marshall Plan, and standing by it during the Cold War. She said she was gratified to hear the president underline the importance of NATO and said Germany is trying to work on spending more on defense.

Merkel said that Germany is going to “step up” its work in Afghanistan and in Syria.

2:10 p.m. ET Mr. Trump kicked off the press conference saying that their two nations have a lot in common in terms of their desire for security and peace. He started speaking about rebuilding the American industrial base, and wanting to include and focus on women in that effort.

The president said he mentioned to Merkel the need for NATO members to contribute more money to the alliance because he says they owe more than they’re paying.

“I want to thank the chancellor for supporting NATO and its efforts in Afghanistan,” Mr. Trump said. “I also appreciate Chancellor Merkel’s leadership along with the french president the conflict in Ukraine where we ideally seek a peaceful solution.”

He reiterated the need to defeat “radical Islamic terrorism” and the Islamic State in Iraq and Syria (ISIS). He said over lunch, they will discuss fair and reciprocal trade policies.

“Together, we can shape a future where all of our citizens have a path to financial security,” he said.