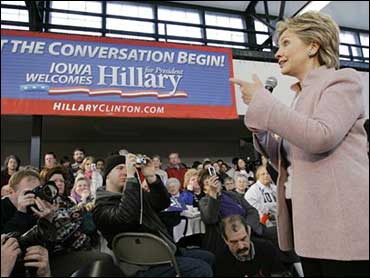 Former President George H.W. Bush once spoke of the "Big Mo'" — the idea that a presidential candidate could ride momentum from early victories in Iowa and New Hampshire all the way to his party's nomination, even to the White House.

But an increasingly compact primary season and the growing number of candidates choosing to opt out of public financing — freeing them from spending restrictions — may mean that Big Mo' is no more.

A glance at the primary calendar shows why: After a handful of key contests spread throughout late January, a glut of states awaits on Feb. 5 — a day that threatens to become the equivalent of a national primary.

The list of states that are holding contests on that day is significant: Alabama, Arizona, Arkansas, Delaware, Missouri, New Mexico, Oklahoma and Utah. But other states — California, Colorado, Illinois, Florida, Michigan, Montana, New Jersey, Texas and possibly more — are moving to join that club.

The Feb. 5 slate could include the three largest states in the country and five of the top 10. If one candidate were to sweep those states, he or she would gain a sizable advantage toward winning a party's nomination.

The ever-shortening primary calendar has already claimed victims in past elections. In 2000, John McCain scored early wins in New Hampshire and Michigan, but then was quickly overwhelmed by George W. Bush, who had more money and a larger organization. In 2004, Howard Dean, who entered the primary season with what looked like Big Mo', had little time to recover from a disappointing performance in the Iowa caucuses and his infamous "scream," allowing John Kerry to coast to the nomination.

While wins in New Hampshire and Iowa can give a candidate plenty of free media, these days that may not be enough to overcome a well-prepared, well-moneyed campaign that has had ads and organization in place for months in all the states with Feb. 5 contests. The wave that Big Mo' requires would not have time to build.

"Once again the money primary becomes more important than virtually anything else," said Mike Collins, a Republican strategist who is not affiliated with any candidate. "It remains to be seen whether it's possible for an insurgent campaign to gain any traction under this schedule. It becomes more and more doubtful."

Collins and others say the primary schedule for 2008 is bad for democracy and produces poorly vetted presidential candidates who aren't built for the long haul. This distaste for the primary schedule extends even to those who are trying to get their state moved up the calendar.

"It's unfortunate that we can't move it all back to June," said state Sen. Ron Calderon, D-Calif., the sponsor of legislation that would move his state's presidential primary to Feb. 5. "But the fact is we have the last say on who the presidential nominee is, and I think that's unfair."

Calderon's bill passed the state Senate on Tuesday and has solid support in the state Assembly, as well as from Republican Gov. Arnold Schwarzenegger, making it likely that the most populous state in the union will join the growing list of those holding their contests on Feb. 5.

Unlike the lineup of January contests — in Iowa, New Hampshire, Nevada and South Carolina — the Feb. 5 field may include large states like California, Michigan and New Jersey. In states like these, the pancake breakfasts, house calls and diner stops that work in the hamlets of New Hampshire become inefficient. Television and radio, though impersonal, become indispensable.

They can also be extraordinarily expensive — which is why the "money primary" is already in full swing. While the Clintons and McCains of the field will have no problem affording them, second- and third-tier candidates, even with an upset win in one of the early states, will have a hard time raising money for such luxuries. Democrats have only a week between the South Carolina primary on Jan. 29 and the Feb. 5 avalanche. Republicans have even less time — their South Carolina contest is on Feb. 2.

(CBS)
Yet some campaigns outside the top tier still believe they can ride a victory in Iowa or New Hampshire to broader success. That's the strategy being pursued by former Iowa Gov. Tom Vilsack in his bid for the Democratic nomination. His campaign believes voters from his home state will give him a potent boost.

"The most important way is to win Iowa, and that's what we're going to do," campaign spokesman Josh Earnest said. "After winning Iowa and a strong showing in New Hampshire, Governor Vilsack is going to have the name ID and financial recourses that he needs — and most of all, he's going to have the momentum. There's a clear path."

But Collins said such an approach is unlikely to succeed.

"The 'Big Mo' candidates face a stronger and stronger firewall," he said. "The money and the organization of a front-running candidate become pretty formidable with front-loading."

While the primary schedule for 2008 is largely set — the two major parties already have adopted rules for determining their nominees — some organizations are working to try to turn the tide and return to a system in which nominations weren't in hand until the early summer.

One of those groups is the Democratic Party itself. At its recent winter meeting, the Democratic National Committee adopted rules that would reward a state with more delegates at the national convention if it moved back its primary to a later date.

"There are concerns about so many states going up front," one DNC official said. "We needed to expand the number of states involved in the early nominating process. Retail politics just isn't going to work in some of these larger states."

Yet since the adoption of that rule, several state legislatures have continued to move toward scheduling their primaries on Feb. 5, suggesting the DNC's incentive plan may not be working.

Another plan, backed by the National Association of Secretaries of State (NASS), would create a regional primary system dividing the country into four groups: Eastern, Southern, Midwestern and Western.

The plan would allow Iowa and New Hampshire to keep their "first in the nation" contests, but the order the four regions hold their primaries would rotate, meaning one region would hold its primary before the others every 16 years.

NASS spokeswoman Kay Stimson said the organization was one of the few that was looking after the national interest with regard to picking a presidential nominee. "There was a lot of consensus that no entity with a national perspective is really doing what's in the best inters of the voters," she said.

But the prospects for such a massive overhaul may be difficult in a system in which individual states have a large degree of autonomy in scheduling nominating contests. Calls for reform in previous campaign cycles have done little to stop the current trend.

"I remember that the lessons of 1996 were going to teach us in 2000, and 2000 was going to teach us for 2004," Collins said. "The bottom line is, this is a process that's being dictated by several disparate state legislatures that are acting in their own interest. It seems no one has the national interest at heart."