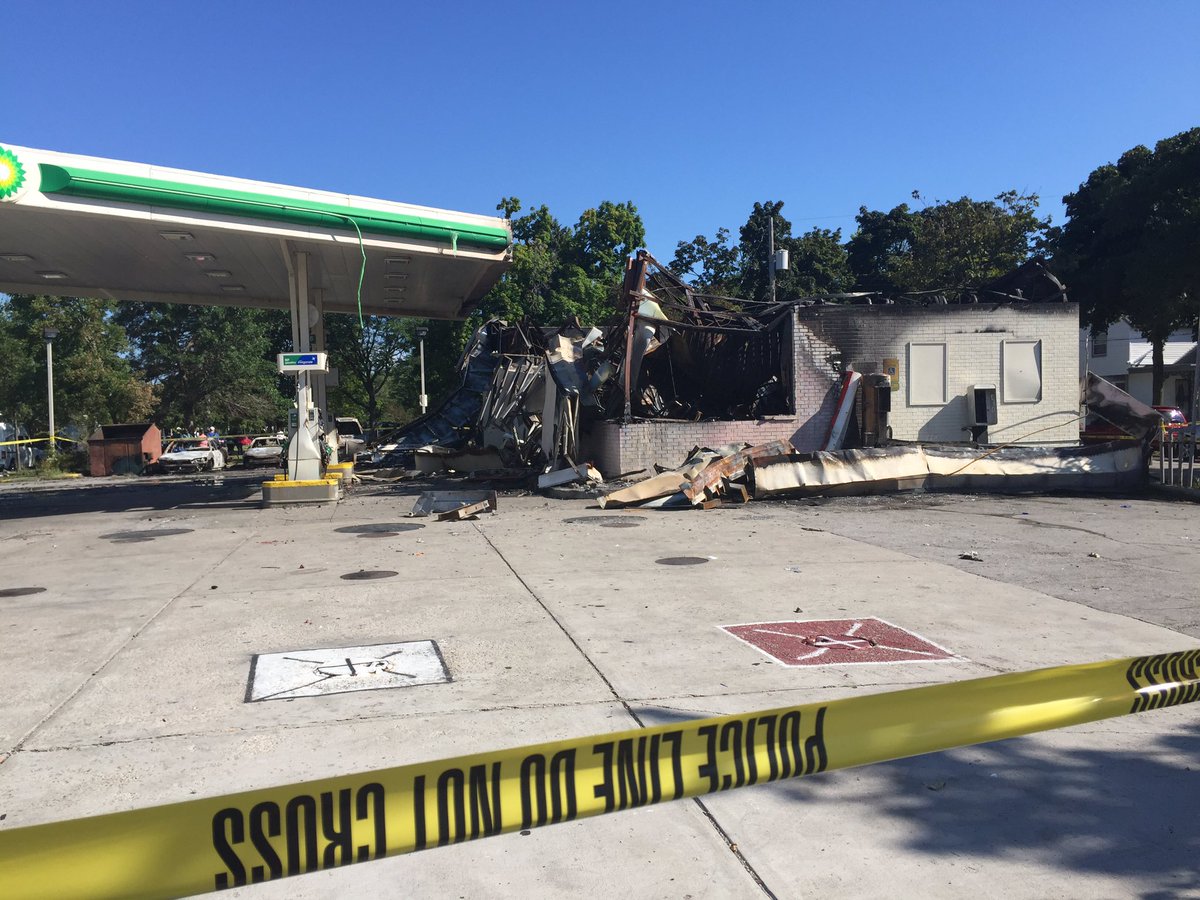 MILWAUKEE -- Wisconsin Gov. Scott Walker activated his state's National Guard on Sunday to help police in Milwaukee if violent protests persist following the fatal shooting of a man by officers who said he was fleeing a traffic stop.

At least four businesses were burned and police officers hurt in violence that broke out Saturday night a few hours after the officer-involved shooting. Police said the man had a handgun.

Milwaukee police say both the man whose fatal shooting sparked violent protests in the city and the police officer who shot him are black.

Chief Edward Flynn made the disclosure at a news conference Sunday. Flynn identified the man killed Saturday as 23-year-old Sylville K. Smith, and says Smith had a "lengthy arrest record."

Mayor Tom Barrett says a still image pulled from the officer's body camera shows "without question" that Smith had a gun in his hand when he was shot.

Police earlier said Smith fled from a traffic stop. Flynn said he wasn't sure what prompted the stop, but said Smith's car was "behaving suspiciously."

The protests happened on the city's predominantly black north side.

The Milwaukee mayor said four officers were injured in the violent protest and have been treated and released from a hospital.

The sister of Smith says she wants prosecutors to file charges against the police officer who shot her brother.

Twenty-four-year-old Kimberly Neal was speaking to The Associated Press at a vigil Sunday evening on the spot where her brother was killed Saturday afternoon. Supporters surrounded her as she held a bouquet of blue balloons.

She asked the crowd for donations for his burial. She says that she just hopes her family gets justice and wants prosecutors to file charges against the officer.

Asked about the violence on Saturday night, Neal said: "People stuck together and they are trying to stand up," for their rights.

After the vigil, protesters went across the street to the ruins of a gas station destroyed in the violence and began singing hymns.

The violent protests appear to be part of the tension between minority communities and police officers that has boiled over in recent months.

Walker said he took the step after receiving a request from Milwaukee County Sheriff David Clarke and talking with Mayor Tom Barrett and the Guard's leader. His announcement said the Guard will be in position to help "upon request."

Walker praised citizens who showed up Sunday to clean up the north side neighborhood where the violence took place. He called for "continued peace and prayer."

According to CBS Milwaukee affiliate WDJT-TV, Sheriff Clarke said: "We cannot allow for a repeat of what happened last night. I am going to utilize all available resources to accomplish that."

Earlier Sunday, volunteers swept and picked up debris in the neighborhood rocked by Saturday's violence.

WDJT reported that a man identifying himself as the victim's brother (seen in the above video) says the protests were a "riot" and they happened because police "failed to protect us like they were sworn to do."

Up to three dozen people swept up glass and filled trash bags with rocks, bricks and bottles at an intersection where a BP gas station burned to the ground, a traffic light was bent and bus shelters were shoved to the ground Saturday night. One volunteer picked up a bullet casing and handed it to police.

Darlene Rose, 31, said she understands the anger that fueled the violence, but that it doesn't help.

"I feel like if you're going to make a difference, it's got to be an organized difference," Rose said. "The people that came and looted, you're not going to see them here today."

The protesters were largely black, and Alderman Khalif Rainey -- who represents the district -- said early Sunday that the city's black residents are "tired of living under this oppression." Nearly 40 percent of Milwaukee's 600,000 residents are black, and heavily concentrated on the north side.

The anger at shootings by Milwaukee police is not new, and comes as tension between black communities and law enforcement has ramped up across the nation, resulting in protests and the recent killings of officers in Baton Rouge, Louisiana, and Dallas.

Milwaukee was beset by protests and calls for police reform after an officer fatally shot Dontre Hamilton, a mentally ill black man, in 2014. In December, the Justice Department announced it would work with Milwaukee police on reforms. Chief Ed Flynn had asked for what's known as a collaborative reform process after the federal government said it wouldn't pursue criminal civil rights charges against the officer.

Critics said the department should have submitted to a review of its patterns and practices, as was conducted in Ferguson, Missouri, after the fatal shooting of 18-year-old Michael Brown, who was black, by a white police officer in 2014.

The state is investigating the latest shooting in Milwaukee. Barrett said the officer was wearing a body camera.

Barrett said police stopped the 23-year-old man who died for "suspicious activity." Police said he was carrying a gun that had been stolen in a March burglary in suburban Waukesha.

"This stop took place because two officers ... saw suspicious activity," the mayor said. "There were 23 rounds in that gun that that officer was staring at. I want to make sure we don't lose any police officers in this community, either."

At one point Saturday evening, as many as 100 protesters massed at 44th Street and Auer Avenue, surging against a line of 20 to 30 officers. Police made at least two efforts to disperse the protesters before they finally dwindled after midnight.

The Milwaukee Journal Sentinel reported that officers got in their cars to leave at one point and some in the crowd started smashing a squad car's windows. Another police car was set on fire. The newspaper reported that one of its reporters was shoved to the ground and punched.

A bank, a gas station, an auto parts store and a beauty supplies shop were burned in the violence. Firefighters held back from the gas station blaze because of gunshots.

The businesses that burned included a BMO Harris bank branch, a BP gas station, an O'Reilly Auto Parts store and a beauty supply store. Firefighters held back from the gas station blaze because of gunshots.

CBS Milwuakee affiliate WDJT reported that the gas station that was torched had been the focal point of community anger recently. Protesters said in July that gas station employee Bhupinder Singh fired gun shots at children. Singh said the children rushed the store and he feared for his life.

WDJT reported the 23-year-old suspect had a lengthy arrest record. The victim of the suspect's burglary reported 500 rounds of ammunition were also stolen with the handgun.

The officer is a 24-year-old male with six years of service with the Milwuakee Police Department, including three years as an officer. He was not injured and, as is standard practice, will be placed on administrative duty during the investigation.