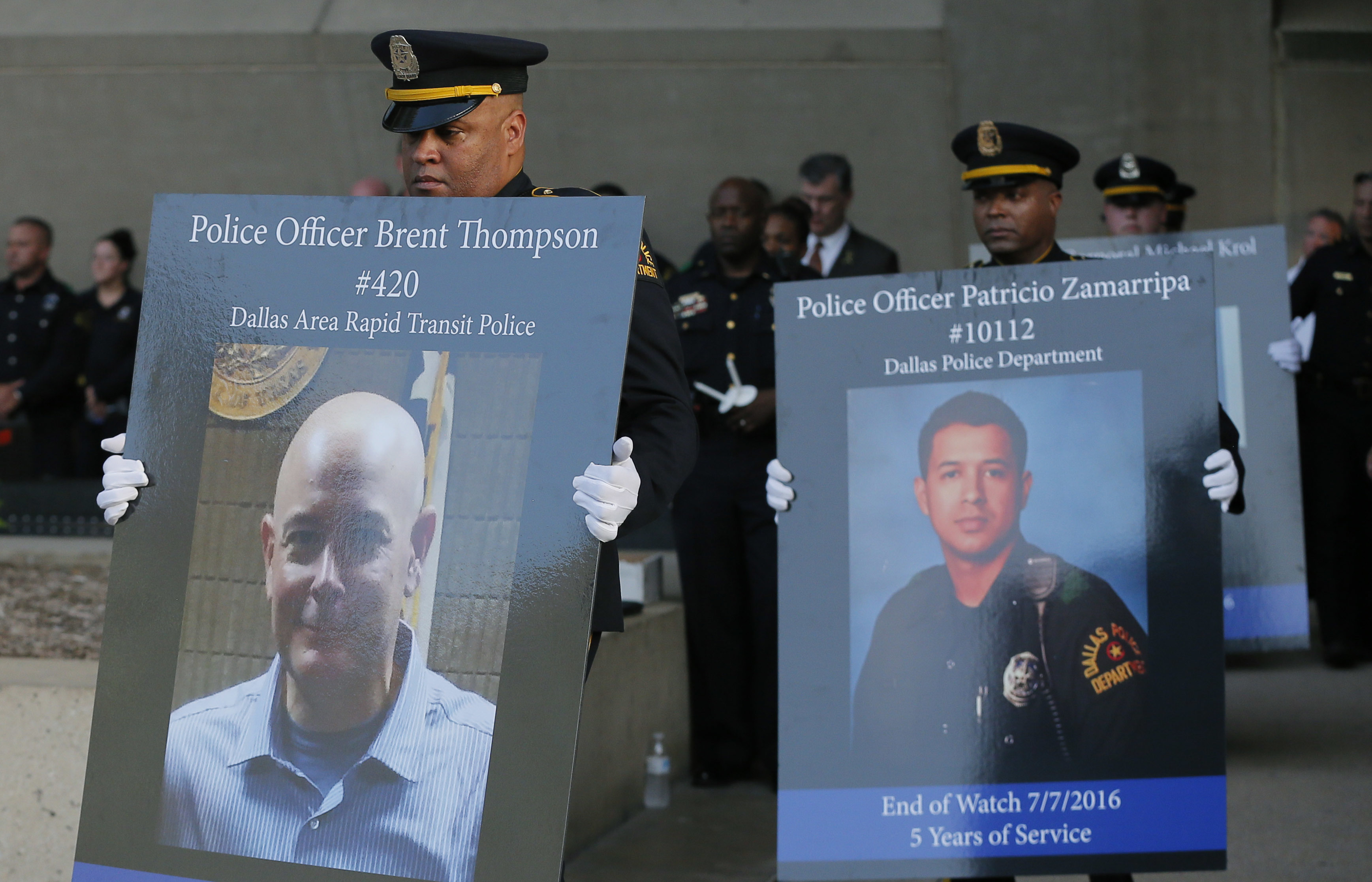 DALLAS -- More than 1,000 people gathered in downtown Dallas to attend a candlelight vigil for the five police officers killed during a protest march.

Speakers at the Monday night vigil included police officials and friends of the slain officers. Portraits of the officers were propped up in front of the speaker's platform.

Brown started with a Superman reference and said of his four fallen officers, "They're like superheroes."

Dallas Area Rapid Transit Chief J.D. Spiller said he would challenge anyone who thought what happened would tear the city apart. He said Texas must lead on race relations in America, and on supporting and protecting police officers.

Four Dallas police officers and one DART officer were killed in Thursday's attack.

Leaders from the Dallas Police Department and DART Police Departments praised the bravery and commitment of the officers they lost and made it clear Dallas is strong in the wake of the deadly ambush, CBS Dallas-Fort Worth reported.

"We will not let one man divide our city and divide our country," said Dallas Police Association President Ron Pinkston.

As Pinkston introduced Dallas Police Chief David Brown, who he's often at odds with, Pinkston praised him for his response to the ambush.

Shortly before 9 p.m. citizens and officers lit thousands of candles in memory of the officers who were killed.

A common theme emerging in the aftermath of the Dallas ambush, CBS News correspondent Omar Villafranca reported, is family, whether it's a wife or a daughter remembering a husband or father, or the police family rallying around its own.

Heidi and Mike Smith were living the American Dream. She's a teacher; he was a police officer.

"The hospital chaplain put his hand out to me. And I knew," she said.

Sgt. Mike Smith was dead. Before he went to work, without fail, Mike always said goodbye to his daughters Victoria and Caroline.

"I would always at least give him a hug before he left," Victoria said.

But on Thursday, something was different.

Caroline recalled, "He said to me, 'What if this is the last time you ever kiss me or hug me?'"

Villafranca asked, "Did he always say that?"

"No. It just felt different to me. I thought something bad was going to happen."

Dallas Police Officer Jorge Barrientos saw three members of his unit shot down: "I had people very close to me, people in my unit, friends, brothers go down next to me, within feet of me."

The officers died doing what they had sworn to do: To protect and serve.

"They had no regard for their own life," said Shetamia Taylor, one of two civilians shot by the assassin during Thursday's protest. "They stayed there with us. They surrounded my son and I."

Nearby officers ignored the danger to rush to her aid. "I am so sorry that they lost their lives," Taylor said. "But I'm thankful. I am so thankful."