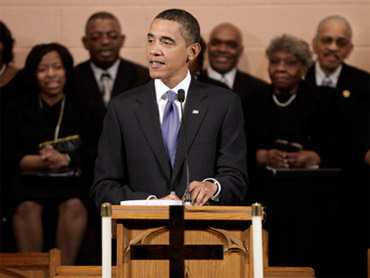 Last April, federal judge Barbara Crabb found that the National Day of Prayer is unconstitutional, writing that it "goes beyond mere 'acknowledgment' of religion because its sole purpose is to encourage all citizens to engage in prayer, an inherently religious exercise that serves no secular function in this context."

Today, however, a federal appeals court panel voted 3-0 to overturn that ruling. The decision was based on the finding that the group that challenged the law did not have standing to do so.

The lawsuit was brought by a group of atheists and agnostics called the Freedom From Religion Foundation, which argued that it violated the separation of church and state.

The National Day of Prayer was established by Congress in 1952, and in 1988 was set as the first Thursday in May. By law, the president must proclaim a national day of prayer every year. Despite the initial ruling President Obama proclaimed a National Day of Prayer last year; in his proclamation, he said in part, "In prayer, we have expressed gratitude and humility, sought guidance and forgiveness, and received inspiration and assistance, both in good times and in bad." He also called on Americans to "pray, or otherwise give thanks, in accordance with their own faiths and consciences, for our many freedoms and blessings."

The administration, which appealed the initial ruling, argued that the National Day of Prayer was legal because it simply acknowledged the role of religion in the United States. The ruling finding the day unconstitutional sparked outrage last year from some lawmakers, among them Texas Republican Lamar Smith, who asked, "What's next? Declaring the federal holiday for Christmas unconstitutional?"

In asserting that the Freedom From Religion Foundation lacked standing, the U.S. Court of Appeals for the 7th Circuit said that "unless all limits on standing are to be abandoned, a feeling of alienation cannot suffice as injury in fact." It found there was no injury in part because the proclamation can essentially be ignored by an individual.

The Freedom From Religion Foundation said it would seek a rehearing before the full appeals court.

"Congress and the president of the United States have no business telling me or any other citizen to pray, 'to turn to God in prayer at churches,' much less setting aside an entire day for prayer every year and even telling me what to pray about," said Foundation Co-President Annie Laurie Gaylor.

"Today's ruling sends a message to Judge Barbara Crabb and any other activist judge who would rewrite the Constitution to advance a hostile treatment of religion in public life," said the group's president, Tony Perkins.