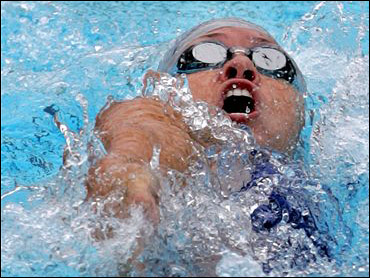 Natalie Coughlin was an infant swimmer.

"I have her YMCA swimming certificate when she was 10 months old," her mother, Zennie Coughlin, tells National Correspondent Hattie Kauffman for The Early Show.

On College Sports Television, the announcer says, "And Natalie pops to the surface with a body length lead over the field.."

These days, the California native is one of the best swimmers in the world. Some say she could be the golden girl of the Athens games.

Natalie says, "All of a sudden, being in the limelight and being, I guess, the golden girl - for people to say that, it's a huge compliment."

Her parents, Jim and Zennie Coughlin, attend all her meets, and of course, they'll be in Athens.

"You always worry about your daughter and hope she does well," Jim Coughlin says. "You get a little nervous, but I don't think we get overly nervous."

At age 15, Natalie began winning everything in sight. But then, she suffered a devastating shoulder injury, preventing her from trying out for the Sydney games. Pain and disappointment almost made her walk away.

Her coach, Teri McKeever, points out, "There's times when you doubt and question, 'Is it worth getting back?' And I'm pretty confident there were times she really didn't know if it was worth it. Fortunately, she stuck with it."

And she kept getting better.

She had a streak of 61 straight wins in college and set several world records. Natalie credits much of her success to her parents -- not because they pushed her, but because they didn't.

Natalie says, "Everyone's seen those psycho parents who beat up other parents at whatever meet and, who just, you know, are living vicariously through their children, and I feel so sorry for those kids who have to go through that, because that's so unfair."

Jim Coughlin adds, "You see parents running around with stopwatches, and they're watching their kids, and they'll hit that stopwatch, 'Oh! You could have done a couple of hundredths seconds better,' you know? And it's, like, the question would never be, 'You didn't make a time.' It's, 'Did you think you did your best? Yeah? Great.'"

Her father says his role is not to be a taskmaster or a coach. "You would never want to do that," he says, "Coaches hate parents like that."

That's not to say they're passive. Sit next to Jim and Zennie Coughlin at a swim meet, and you might consider earplugs as they cheer for their daughter at the top of their lungs.

All that winning means there are more medals, trophies, and awards than there is space.

"There are so many [gold medals] that we've stopped hanging them," Jim Coughlin says.

Zennie Coughlin adds, "She's given them away to friends and to grandparents." That includes trophies as well.

"A lot of them are still in boxes," Zennie Coughlin says and, pointing at a box, she adds that in it, there are "ribbons, medals, all sorts of pins that she's received."

Also in the box are Natalie's gold medals from Pan Pacs, something that Zennie says with a laugh she knows should be framed.

There are also world records. "There's six of them in there," Zennie Coughling says, pointing out there isn't space to have each one of them framed.

And it continues: Trophies stuffed in cabinets; hidden in closets, major awards that you need a ladder to see.

And all the while, their daughter prepares for the biggest prize of all: an Olympics gold medal. She'll be swimming at least three events. Natalie Coughlin wants to win, and she wants to inspire the next generation of swimmers.

She says, "I try and carry myself in a good way, because, you know, those little kids are watching your every move, and, and I try to be a good role model."

Natalie Coughlin's quest for Olympic gold begins Saturday. There's a chance that once all the relay teams are announced, that Natalie Coughlin could be in line for five medals.