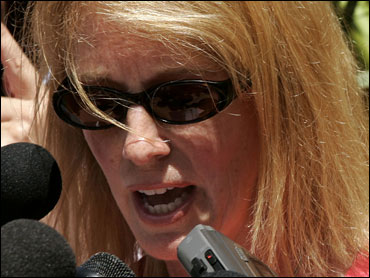 After spending nearly two months in Aruba, searching for clues and offering rewards, the mother of a missing teen has left the island and returned home to Alabama.

According to Paul Reynolds, Natalee Holloway's uncle, it was "very difficult" for Beth Holloway Twitty to leave without knowing her daughter's fate.

Natalee Holloway disappeared without a trace on May 30th.

"It was very difficult for Beth to leave. She's been through a lot," Reynolds said. "She intends to return very soon and keep this investigation alive."

Today, A volunteer group searching for Natalee Holloway dug through a landfill for a third straight day.

Crews were using a bulldozer and a tractor hoe to pick through the landfill where a witness claimed he saw men dump and cover a female body two days after Holloway disappeared, said Robert Cook, spokesman for the volunteer Texas EquuSearch, which is coordinating the landfill effort.

"Our strategy is to continue digging holes (in the landfill) and then bring in the dogs to sniff out any human remains," Cook said.

Searches at the landfill Friday and Saturday produced no sign of Holloway.

The witness, an Aruban man who claimed to be dropping off trash at the time of the incident, has been questioned by the FBI and Aruban police, Texas EquuSearch director Tim Miller said Saturday. The witness said the woman had blond hair, he said.

The witness could not identify the men but said they were driving a light colored jeep, Miller said. The witness told his brother what he saw soon afterward, and the brother told police, he said.

Police spokesman Edwin Comenencia said police searched the landfill after receiving the tip in days following Holloway's disappearance, but found nothing. He said the witness recently approached Holloway's family, who asked for another search.

Extensive searches by Dutch marines, Aruban police, and thousands of volunteers have found no trace of the Alabama honors student, who disappeared on the final night of a high school graduation trip in Aruba.

No one has been charged in the case and 17-year-old Joran van der Sloot is the only person detained as a suspect. Six other men, including van der Sloot's father and two Surinamese brothers, were previously held and released.