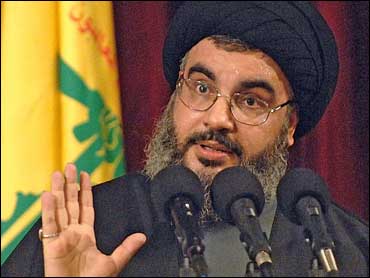 Hezbollah leader Sheik Hassan Nasrallah said in a TV interview aired Sunday that he would not have ordered the capture of two Israeli soldiers if he had known it would lead to such a war.

"We did not think, even one percent, that the capture would lead to a war at this time and of this magnitude. You ask me, if I had known on July 11 ... that the operation would lead to such a war, would I do it? I say no, absolutely not," he said in an interview with Lebanon's New TV station.

Nasrallah also said "contacts" for negotiations on a prisoner swap between Israel and Hezbollah guerrillas had already begun.

He said Italy and the United Nations had made contacts to help mediate a prisoner swap with Israel, but did not specify whether they had contacted Hezbollah directly.

"The Italians seem to be getting close and are trying to get into the subject. The United Nations is interested," Nasrallah said.

The guerrilla leader did not specify in which capacity Italy had expressed interest — on its own or on Israel's behalf.

Nasrallah said Lebanese Parliament Speaker Nabih Berri was in charge of the negotiations.

He added that the subject would be discussed during U.N. Secretary General Kofi Annan's visit to Beirut on Monday. He said there had been "some contacts" to arrange a meeting between him and Annan, but that it was unlikely for security reasons. Nasrallah went into hiding on the first day of the war and his whereabouts are unknown.

He said in the interview Sunday that the Israelis "would not hesitate" to kill him if they knew where he was hiding.

Nasrallah also said he did not believe there would be a second bout of fighting with Israel. "The current Israeli situation, and the available givens tell us that we are not heading to another round," he said.