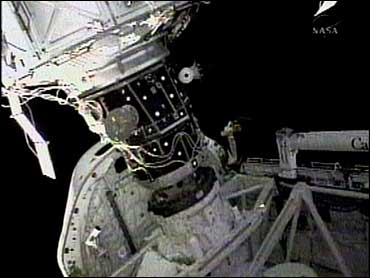 NASA discovered a worrisome gouge on Endeavour's belly soon after the shuttle docked with the international space station Friday, possibly caused by ice that broke off the fuel tank a minute after liftoff.

The gouge — about 3 inches square — was spotted in zoom-in photography taken by the space station crew shortly before Endeavour delivered teacher-astronaut Barbara Morgan and her six crewmates to the orbiting outpost.

"What does this mean? I don't know at this point," said John Shannon, chairman of the mission management team. If the gouge is deep enough, the shuttle astronauts may have to patch it during a spacewalk, he said.

On Sunday, the astronauts will inspect the area, using Endeavour's 100-foot robot arm and extension beam. Lasers on the end of the beam will gauge the exact size and depth of the gouge, Shannon said, and then engineering analyses will determine whether the damage is severe enough to warrant repairs.

The gouge — white against the black tiles on the underside of Endeavour — is several feet from the starboard main landing gear door. It appears to be the result of ice, although engineers are not positive; the damage could have been caused by a piece of foam insulation that came off the external fuel tank.

Radar images show a white spray or streak coming off Endeavour 58 seconds after liftoff. Engineers theorize that if the debris was ice, it pierced the tile and then broke up, scraping the area downwind. Pictures from Friday's photo inspection show downwind scrapes.

Behind the technology of fireworks

Even though it was an extremely hot day in Florida, the fuel tank was loaded with super-cold fuel, which could have allowed dangerously big chunks of ice to form on its surface.

Shannon said it is uncertain how big the debris was. A 1.67-pound chunk of foam led to Columbia's catastrophic re-entry in 2003.

Ice is heavier than foam, however, and would cause more damage.

In all, nine pieces of debris, mostly foam, came off the fuel tank during Wednesday evening's liftoff, and three were believed to have struck the shuttle. Shannon said further analysis of the photos from Friday's inspection could uncover more damage.

Mission Control quickly notified the seven shuttle astronauts, including Morgan, of the damage.

Commander Scott Kelly was at the controls when Endeavour performed the orbital backflip earlier in the day so the space station crew could photograph the belly and check for any damage.

While still 625 feet out, Kelly steered Endeavour through a complete somersault so the three space station residents could photograph the shuttle's belly. The 210-mile-high backflip — which lasted nine minutes and spanned the entire Atlantic — has been standard procedure ever since the Columbia disaster, providing a rare camera view of the shuttle's often-nicked underside.

Shortly afterward, Endeavour pulled up to the space station and neatly parked as the two spacecraft soared above the South Pacific. The shuttle will remain at the outpost for at least a week.

Morgan's entrance into the space station was dramatic, to say the least.

Her shuttle crewmates, all but one of whom floated in ahead of her, resembled paparazzi as they photographed her coming through the hatch. The station residents also captured the moment with cameras. She paused, as the flashes popped, a video camera running in her right hand and sunglasses pushed up on her forehead.

Morgan — who was Christa McAuliffe's backup for Challenger's tragic mission in 1986 — briefly set aside her camera to hug the three space station residents, then took more video of the crowded outpost. She plans to use the video for educational events after the mission.

Endeavour is delivering several new space station parts, most notably a 2-ton square-shaped beam that will be hooked up to the orbiting outpost on Saturday. The astronauts also will install a giant storage platform for spare parts and a new gyroscope that will replace one that is broken.

For the first time, a docked shuttle will draw power from the space station using a new system being tested by Endeavour. If the system works as advertised, NASA will extend Endeavour's flight from 11 days to 14 days, allowing the shuttle to remain docked at the station for a record 10 days.

Of the 10 people aboard the joined spacecraft, Morgan is clearly the attention-getter. The former Idaho elementary schoolteacher backed up McAuliffe during Challenger's short-lived mission and was invited by NASA into the astronaut corps 12 years later. The Columbia disaster further delayed her trip into space.