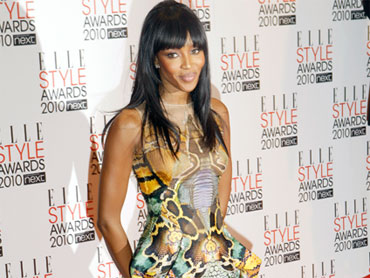 The driver, 27-year-old Miodrag Mejdina called 911 Tuesday after he says Campbell attacked him with her cell phone - her apparent weapon of choice when attacking the help - while he was driving her to the set of a movie.

She jumped out of the SUV while he was on the phone with the police...call it, Project Runaway.

Then, just as quickly, Mejdina withdrew his complaint saying it was just a "misunderstanding." Only time will tell what actually happened. Or not. Who knows?

Campbell said in a statement that she was glad Mejdina recanted and said she did not want to "be held hostage to [her] past."

And what a past. Apparently Campbell's "fiery personality" and penchant for throwing communication devices has gotten her into a lot of trouble.

In 2000, Campbell pleaded guilty in a Toronto court to a 1998 assault on Georgina Galanis, her then assistant; Campbell had allegedly assaulted Galanis with a telephone in a hotel room and threatened to throw her out of a moving Peugeot.

In March 2005, Campbell allegedly slapped assistant Amanda Brack and beat her around the head with a BlackBerry personal organizer. It's not clear how that case was resolved.

On March 30, 2006 in New York City, Campbell was arrested for allegedly assaulting her housekeeper, Ana Scolavino, with a jewel-encrusted mobile phone, resulting in a bloody head that required several stitches. That time she plead guilty and was sentenced to five days community service.

She served it in 8-inch heels, natch.

She was also required to attend anger management classes, which were apparently somewhat effective because this time the help didn't require any stitches.