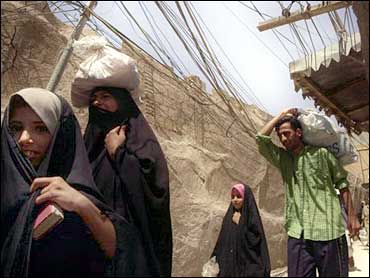 Ripple effects from the ongoing battle for the holy city of Najaf, and for the hearts and minds of Iraq's Shiites, spread across the country on Wednesday.

Iraq's most powerful Shiite cleric arrived home from Britain and his aides called for a nationwide march to Najaf to end nearly three weeks of fierce fighting between U.S. forces and Shiite militants in this holy city.

In honor of Grand Ayatollah Ali Husseini al-Sistani's arrival, militants loyal to radical Shiite cleric Muqtada al-Sadr said they would suspend fighting with coalition and Iraqi forces in every region al-Sistani passes through on his way to Najaf, said al-Sadr aide Aws al-Khafaji.

Heavy fighting persisted in Najaf's Old City, the center of much of the past three weeks of clashes. U.S. warplanes fired on the neighborhood, helicopters flew overhead and heavy gunfire was heard in the streets, witnesses said.

In nearby Kufa, just northeast of Najaf, unidentified gunmen killed two people and wounded five others taking part in what appeared to be a peaceful demonstration supporting al-Sadr, said Mohammed Abdul Kadhim, an employee at Kufa's Furat al-Awsat Hospital.

Militants said Wednesday they had kidnapped the brother-in-law of Iraqi Defense Minister Hazem Shaalan and demanded he end all military operations in Najaf, according to a video, Al-Jazeera television reported.