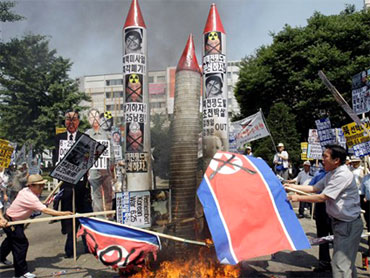 Punching their fists into the air and shouting "Let's crush them!" some 100,000 North Koreans packed Pyongyang's main square Thursday for an anti-U.S. rally as the communist regime promised a "fire shower of nuclear retaliation" for any American-led attack.

Several demonstrators held up a placard depicting a pair of hands smashing a missile with "U.S." written on it, according to footage taken by APTN in Pyongyang on the anniversary of the day North Korean troops charged southward, sparking the three-year Korean War in 1950.

North Korean troops will respond to any sanctions or U.S. provocations with "an annihilating blow," one senior official vowed - a pointed threat as an American destroyer shadowed a North Korean freighter sailing off China's coast, possibly with banned goods on board.

In response to the sanctions, the North pulled out of nuclear talks and has ramped up already strident anti-American rhetoric. And the isolated regime may now be moving to openly flout the resolution by dispatching a ship suspected of carrying arms to Myanmar.

While it was not clear what was on board the North Korean-flagged Kang Nam 1, officials have mentioned artillery and other conventional weaponry. One intelligence expert suspected missiles.

The U.S. and its allies have made no decision on whether to request inspection of the ship, Pentagon press secretary Geoff Morrell said Wednesday in Washington, but North Korea has said it would consider any interception an act of war.

If permission for inspection is refused, the ship must dock at a port of its choosing so local authorities can check its cargo. Vessels suspected of carrying banned goods must not be offered bunkering services at port, such as fuel, the resolution says.

Though it may look like no contest between a billion-dollar American warship and a North Korean rust bucket, the U.S. is facing a dilemma, reports CBS News national security correspondent David Martin.

"Do we know for certain that this is what we want to do at this point in time? And the answer may be no. It may be this is not the right ship," said former state department official Jack Pritchard.

Pritchard told Martin that the U.S. has one - if not both - hands tied behind its back. First, the Navy cannot use force to intercept the Kang Nam. Second, it is not certain what the Kang Nam is carrying.

"You're going to need some absolutely clear and irrefutable information," Pritchard said.

A senior U.S. defense official said the ship had cleared the Taiwan Strait. He said he didn't know whether or when the Kang Nam may need to stop in some port to refuel, but that the Kang Nam has in the past stopped in Hong Kong's port.

Another U.S. defense official said he tended to doubt reports that the Kang Nam was carrying nuclear-related equipment, saying information seems to indicate the cargo is banned conventional munitions. Both officials spoke on condition of anonymity in order to talk about intelligence.

North Korea is suspected to have transported banned goods to Myanmar before on the Kang Nam, said Bertil Lintner, a Bangkok-based North Korea expert who has written a book about leader Kim Jong Il.

Pyongyang also has been helping the junta in Yangon build up its weapons arsenal, a South Korean intelligence expert said. He spoke on condition of anonymity because of the sensitivity of the issue.

The two countries have not always been on good terms. Ties were severed in 1983 after a fatal bombing during the South Korean president's visit to Myanmar blamed on North Korean commandoes.

They held secret talks in Bangkok in the 1990s to discuss the lone survivor among the three North Korean commandos involved in the bombing, and since have forged close relations.

The two regimes, among Asia's most repressive, restored diplomatic ties in 2007. Not long after that, in April 2007, the Kang Nam docked at Thilawa port saying it needed shelter from bad weather.

But one expert said reports show the weather was clear then, and two local journalists working for a foreign news agency who went to write about the unusual docking were arrested.

"The Kang Nam unloaded a lot of heavy equipment in 2007," Lintner said. "Obviously, the ship was carrying something very sensitive at that time as well."

North Korea has also helped Myanmar dig tunnels in recent years, said Lintner, adding that the cash-strapped North may have received rice, rubber and minerals in return for its military and other assistance.

"North Korea appears to have exported conventional weapons to Myanmar in exchange for food," another expert said.

Pyongyang is believed to have transported digging equipment to Myanmar, which is seeking to make its new capital a fortress with vast underground facilities, he said, speaking on condition of anonymity to discuss intelligence.

North Korea has been locked in a tense standoff with Washington and other regional powers over its nuclear program. In April, the regime launched a rocket widely seen as a cover for a test of long-range missile technology - a move that drew U.N. Security Council condemnation.

"North Korea is upping the ante with each nuclear and missile test, and appears to be rejecting efforts to return to the Six-Party talks," said CBS News foreign affairs analyst Pamela Falk at the United Nations.

The North responded by abandoning six-nation disarmament talks and threatening to carry out nuclear tests and fire intercontinental ballistic missiles. The North is believed to be developing a long-range missile designed to strike the U.S. but experts say it has not figured out how to mount a bomb onto the missile.

On Thursday, Pyongyang vowed to enlarge its atomic arsenal and warned of a "fire shower of nuclear retaliation" if provoked by the U.S.

North Korea's "armed forces will deal an annihilating blow that is unpredictable and unavoidable, to any 'sanctions' or provocations by the US," Pak Pyong Jong, first vice chairman of the Pyongyang City People's Committee, told the crowd gathered for the Korean War anniversary rally.

In Seoul, some 5,000 people - mostly American and South Korean veterans and war widows - also commemorated the anniversary at a ceremony.

South Korean President Lee Myung-bak said the nation is prepared to counter any type of threat or provocation.

"The South Korean government is firmly determined to defend the lives and wealth of its people and will do its utmost to find the remains of troops killed in the Korean War," he said at the ceremony.

The two Koreas technically remain in a state of war because the conflict ended in a truce, not a peace treaty.