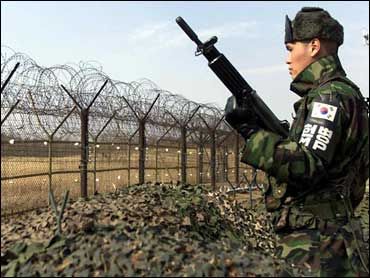 North Korea warned the U.S. and South Korea of possible deadly consequences Monday in retaliation for what it called psychological warfare involving journalist tours to the South's portion of the buffer zone between the rivals.

Monday's warning came after a South Korean military ship sank Saturday due to an unexplained explosion onboard. The ship was near the disputed sea border with North Korea, though South Korean and U.S. officials say they have seen nothing that suggests any North Korean involvement.

The statement by the North's military accused South Korea of staging anti-North Korea "psychological warfare" in the demilitarized zone with visits there by journalists there this year.

The North said that allowing the reporters to tour the zone and nearby areas was aimed at preparing "materials for anti-north smear campaigns." The statement said those actions violate the armistice that ended hostilities in the 1950-53 conflict and that the U.S., a truce signatory, is also responsible.

"If the U.S. and the South Korean authorities persist in their wrong acts to misuse the DMZ for the inter-Korean confrontation despite our warnings, these will entail unpredictable incidents including the loss of human lives in this area for which the U.S. side will be wholly to blame," the statement said.

The statement was issued in the name of an unidentified spokesman for the Korean People's Army in Panmunjom in the DMZ.

The North routinely issues warnings and threatens to attack South Korea and the U.S. The military Friday threatened "unprecedented nuclear strikes" in anger over a report Seoul and Washington plan to prepare for possible instability in the totalitarian country.

Separately, North Korea's Foreign Ministry issued a statement Monday blasting the United Nations for what it said was criticism by the global body of the country's human rights record.

North Korea, ruled by Kim Jong Il, is routinely described in U.N. and other reports as one of the world's most repressive regimes. It denies human rights violations exist in the country.

The 2.5-mile-wide (4-kilometer-wide) DMZ was established as a buffer zone and is guarded by hundreds of thousands of combat-ready troops on both sides. Security is tight and special permission is required to enter. Journalists and tourists are allowed to visit the truce village of Panmunjom.

South Korea's Defense Ministry, however, has decided to allow more than a dozen South Korean media organizations to visit other areas of the zone this year, which marks the 60th anniversary of the outbreak of the Korean War.