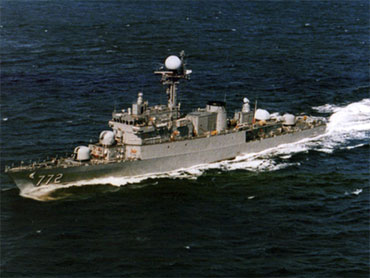 A South Korean naval ship sank near the disputed maritime border with North Korea early Saturday, prompting the South's military to rush vessels to the site to rescue its sailors and raising fears of an attack by the North.

The ship, on a routine patrolling mission with 104 crew members on board, began sinking off the coast of South Korean-controlled Baengnyeong Island close to North Korea around 9:45 p.m. (1245 GMT, 8:45 a.m. EDT), Rear Adm. Lee Ki-sik of the Joint Chiefs of Staff told reporters late Friday.

Lee said an unexplained hole in the bottom of the ship caused the vessel to take on water. South Korea's Yonhap news agency reported that the ship was damaged by an explosion, and said the military had not ruled out the possibility of an attack by North Korea.

Five hours after Seoul heard of the sinking ship, 58 sailors had been pulled to safety but some 40 others were missing, reports said.

The waters around Baeknyeong island are rocky, and some senior government officials speculated that the sinking may have been an accident, not an attack, South Korean media said.

"It's looking more and more like it was just an accident that happens on a ship," Carl Baker, an expert on Korean military relations at the Pacific Forum CSIS think tank in Honolulu, said by telephone.

"The South Koreans are so much more capable these days than the North that it would be difficult for the miscalculation to happen because I think the North understands its lack of ability," he said.

Earlier Friday, officials told Yonhap there were some deaths among the sailors but did not specify the number. The military, meanwhile, moved to strengthen its vigilance near the maritime border, the site of three bloody naval clashes between the warring Koreas. The divided peninsula remains in a state of war because the three-year Korean conflict ended in a truce, not a peace treaty, in 1953.

Hours before the ship started to sink Friday, North Korea's military threatened "unpredictable strikes," including a nuclear attack, in anger over a report that South Korea and the U.S. were preparing for possible instability in the totalitarian country.

After the ship began sinking, President Lee Myung-bak convened an emergency meeting of security-related ministers, including the defense minister and other top military officials. After three hours, they agreed to meet again Saturday without making any statement about the cause of the incident, presidential spokesman Lee Dong-kwan said.

Lee ordered the military to focus on the rescue, he said.

A naval official told Yonhap there were deaths among the sailors, and the cable network YTN said some 40 crew members were missing. However, military officials told the AP they could not confirm deaths, and said 58 sailors had been rescued, with two being airlifted for emergency medical treatment.

Yonhap reported earlier that a South Korean ship fired shots toward an unidentified target in the direction of North Korea, raising fears of an exchange of gunfire.

The military official confirmed that South Korean torops fired shots but said the object detected by radar may have been a flock of birds.

Senior government officials told South Korean media the ship may not have been the target of an attack, but could have struck a rock or been impaired by an explosive on board.

Baeknyeong Island, four hours by boat from the port of Incheon, is the westernmost point of South Korea and is a key military post for South Korea because of its proximity to the North.