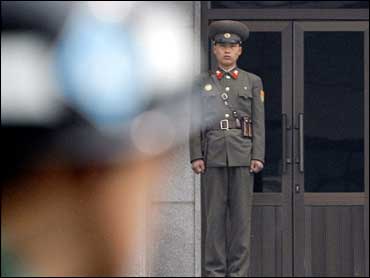 Pyongyang has said it will fire a satellite and reasserted its right to develop its space program in a statement carried Thursday on the state-run Korean Central News Agency.

North Korea did not say exactly what steps it would take in retaliation.

Some regional powers suspect the launch will be a test of North Korea's long-range missile technology.

Earlier Thursday North Korea had mounted a rocket onto a launchpad on its northeast coast, U.S. officials said, putting Pyongyang well on track for the launch.

Secretary of State Hillary Rodham Clinton warned that such a "provocative act" could jeopardize the stalled talks on supplying North Korea with aid and other concessions in exchange for dismantling its nuclear program. (Read a full report on Clinton's remarks regarding North Korea.)

"We have made it very clear that the North Koreans pursue this pathway at a cost and with consequences to the six-party talks, which we would like to see revived," Clinton said Wednesday in Mexico City.

"We intend to raise this violation of the Security Council resolution, if it goes forward, in the U.N.," she said. "This provocative action in violation of the U.N. mandate will not go unnoticed and there will be consequences."

North Korea declared last month that it was making "brisk headway" in preparations to send a communications satellite into space, and notified aviation and maritime authorities that the launch would take place between April 4 and 8, between 11 a.m. and 4 p.m.

Commercial satellite imagery provided has revealed steady progress toward a launch, with a flurry of activity at the Musudan-ni site in late February, and an open hatch and crane hovering above the launchpad two weeks ago. Analysts said the North would need a number of days to conduct tests and to fuel the rocket after mounting the projectile.

U.S. spy satellites detected the rocket two days ago, South Korean reports said - the first indication that the countdown toward a launch has begun. Counterterrorism and intelligence officials in Washington confirmed reports that a rocket was in position.

North Korea is now "technically" capable of launching the rocket in three to four days, South Korea's Chosun Ilbo newspaper said, citing an unnamed diplomatic official. However, South Korean and U.S. intelligence authorities have not yet determined whether the rocket is intended for a satellite or a missile because its upper half is concealed, the Yonhap news agency said, citing an unnamed South Korean government official.

The government said Thursday it could not confirm the reports. But Seoul urged the North to cancel the launch, warning that the move would threaten regional stability and draw international sanctions.

"If North Korea pushes ahead with the launch by ignoring repeated warning by our government and the international community, that would be a serious challenge and provocation on security on the Korean peninsula and regional stability in Northeast Asia," ministry spokesman Won Tae-jae told reporters.

South Korea will take the North to the Security Council whether it launches a satellite or a missile, said Foreign Ministry spokesman Moon Tae-young.

He said both satellites and long-range missiles use similar delivery technologies.

North Korea's bid to send a satellite into space comes at a time of mounting tensions on the Korean peninsula, with Pyongyang lashing out over South Korean President Lee Myung-bak's tough policy toward the North.

Seoul's decision to hold routine military drills with U.S. troops drew a threat from Pyongyang against South Korean airliners flying over North Korean airspace. Flights were diverted. North Korea also cut off the only military communications hot line connecting the two Koreas during the 12-day drills, and repeatedly shut down its border crossing, stranding hundreds of South Koreans who work at southern-run factories in the northern town of Kaesong.

Pyongyang, also at odds with Washington over nuclear disarmament, also is holding two American journalists they accuse of crossing into the country illegally from China last week.

Analysts say Pyongyang, angling to get President Barack Obama's attention as his administration forms its North Korea policy, may use the journalists - Lisa Ling and Euna Lee of former Vice President Al Gore's online media outlet Current TV - as a way to speed up direct talks with Washington, a prime goal of leader Kim Jong Il.

"North Korea appears to be judging that the issue of the two U.S. journalists could serve as a very good occasion in opening up negotiations with the U.S. on its missile and nuclear programs in the future," said analyst Paik Hak-soon of the private Sejong Institute.

Pyongyang has warned Washington, Tokyo and its allies against interfering with the launch.

"Space is not the monopoly of particular powerful countries," the state-run Minju Joson newspaper said in an editorial Thursday.

National Intelligence Director Dennis Blair said in Washington earlier this month that all indications suggest North Korea will in fact launch a satellite.

However, Tokyo, spooked by the test a decade ago and North Korea's attempt to shoot a long-range missile in 2006, says that neither is acceptable and is preparing to shoot down any debris or fragments that might fall on Japan if the launch fails.

However, with North Korea faking a satellite launch in 1998 to cloak a missile development test, Japan is preparing for a missile launch.

U.S. military officials at Misawa Air Base, on Japan's northern fringe just across the Sea of Japan from North Korea, said they are closely monitoring activities. Japan also reportedly plans to deploy an Aegis radar-equipped destroyer carrying a missile interceptor.