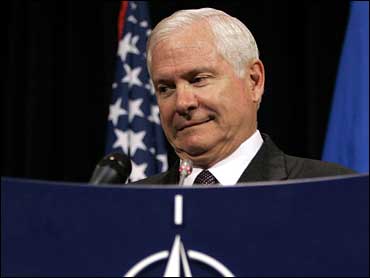 North Korea lambasted U.S. efforts to build a missile defense system Friday and vowed to increase its "self-defense deterrent," a term that the communist regime usually uses to refer to its nuclear program.

"The U.S. is claiming that it is building a global missile defense system to protect against missile attacks from our nation and Iran. This is a childish pretext," the North's ministry said in a statement carried by the country's official Korean Central News Agency.

"We cannot but further strengthen our self-defense deterrent if (an) arms race intensifies because of the U.S. maneuvers," it said.

The North Korean warning came as Russia seemed reluctant to respond to U.S. Defense Secretary Robert Gates' assertion Thursday that the Bush administration will not replace its plan for a missile defense system in Eastern Europe with Moscow's counterproposal for a radar site in Azerbaijan.

"I guess I would have to say, honestly, I was somewhat surprised," said Gates, who is attending a two-day meeting of NATO defense ministers in Brussels, Belgium. "I don't know how to read it, to be honest."

The silence came after other Russian officials blasted the U.S. plan, and warned that the new sites could be targeted by Russian missiles.

Gates said he did not bring the matter up in his session with Serdyukov because, "I felt I'd been pretty explicit yesterday in the session so I didn't feel the need to." Instead, Gates said, they talked about plans for an upcoming meeting between President Bush and Russian President Vladimir Putin.

During a session on Thursday, Gates told the allies that the U.S. will proceed with its plans for a radar system in the Czech Republic to watch for missile threats and 10 interceptor rockets in Poland to shoot down any missiles.

And he flatly dismissed any notion that Russia's push for joint use of a radar station in Azerbaijan could replace the broader U.S. plan.

He also said he doubts that there could be any agreement with the Russians by next month, when Mr. Bush meets Putin at Kennebunkport, Maine.

"I was very explicit in the (NATO) meeting that we saw the Azeri radar as an additional capability, that we intended to proceed with the X-Band radar in the Czech Republic," Gates told reporters Thursday.

Russian officials earlier this week called for a freeze on the U.S. plan, arguing that it would undermine Russia's nuclear deterrent. And they reportedly issued threats against the planned sites in Poland and the Czech Republic.

Meanwhile, NATO ordered its military experts to draw up plans for a possible short-range missile defense system to protect nations on the alliance's southern flank that would be left exposed by proposed U.S. anti-missile units in central Europe.

According to U.S. and NATO officials, the addition of the European bases to anti-missile installations in North America would protect most of Europe from the threat of long-range attack from Iran or elsewhere in the Middle East. But it would leave Turkey, Greece, Bulgaria and parts of Romania exposed.

To fill that gap, NATO Secretary General Jaap de Hoop Scheffer said NATO experts would produce a report by February on short-range anti-missile defenses "that can be bolted on to the overall missile defense system as it would be installed by the United States."

Russia has threatened to retaliate against the U.S. plans by pulling out of a key arms control treaty and pointing warheads at Europe for the first time since the Cold War. However, at last week's G-8 summit, Putin seemed to take a more open approach, suggesting Russia could cooperate with the West on an anti-missile radar base in Azerbaijan.