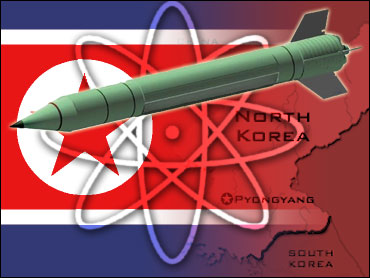 South Korea's No. 2 official said Monday that he believes North Korea does not possess nuclear weapons, contradicting U.S. assertions that the communist nation has one or two atomic bombs.

The comment by Prime Minister Kim Suk-soo appeared to reflect differences in how South Korea and its main ally, the United States, view North Korea. Many South Koreans do not think their neighbor's nuclear development is a serious threat, while President Bush has defined the North as part of an "axis of evil" intent on acquiring weapons of mass destruction.

In Tokyo, the top U.S. diplomat warned of a possible North Korean missile test over Japan in what could be an effort to ratchet up tension over the North's nuclear programs. North Korea alarmed the region by firing a rocket over Japan and into the Pacific in 1998.

"We hear reports that they may engage in a missile test, perhaps overflying the island of Japan," U.S. Ambassador Howard H. Baker said during a speech at a forum on regional security. He cited unidentified sources, including news reports.

In comments in the South Korean National Assembly, Kim said there was no evidence that North Korea had atomic bombs.

"North Korea is believed to have extracted enough plutonium to make one or two bombs before 1994," Kim said. "Since there has been no confirmation that it actually has produced nuclear weapons, we believe that they do not have any."

Secretary of Defense Donald Rumsfeld said recently in Munich, Germany, that most intelligence services know the North Koreans have "one or two nuclear weapons" and "they may have enough nuclear material to make an additional six to eight nuclear weapons" by May or June.

North Korea has only said it has the right to develop nuclear weapons.

In Washington on Sunday, Secretary of State Colin Powell said China should take a more active role in urging North Korea to abandon its nuclear activities.

Powell said he believed there eventually would be talks between Washington and Pyongyang. But he said they should occur in a multilateral setting because the situation involved China, Russia, Japan, South Korea and other countries.

North Korea wants bilateral talks with the United States, and South Korea wants the two adversaries to negotiate as soon as possible.

"We should not let North Korea dictate the terms under which these conversations take place. I think there will ultimately be conversations, but I think other nations have a role to play," Powell said on Fox Sunday News.

Powell cited China, which wants the Korean Peninsula to be free of nuclear weapons, and is a traditional ally of North Korea.

"Half their foreign aid goes to North Korea," Powell said. "Eighty percent of North Korea's wherewithal, with respect to energy and economic activity, comes from China. China has a role to play, and I hope China will play that role."

However, China's ties with North Korea have waned over the years. Also, China likely is mindful that economic pressure on North Korea could send more destitute North Koreans across the border, leading to a humanitarian crisis on Chinese soil.

Washington and its allies then suspended oil shipments, and North Korea responded by taking steps to reactivate nuclear facilities frozen under a 1994 energy deal with the United States.

The board of the Vienna, Austria-based U.N. nuclear watchdog, the International Atomic Energy Agency, will meet Wednesday to review the standoff with North Korea.

Chun Young-woo, director general for international organizations at the South Korean Foreign Ministry, said it was "almost certain" that the board would refer the matter to the Security Council. The council could consider economic and political sanctions.

While President Bush has indicated that he believes the standoff with North Korea can be resolved peacefully, he said Friday that "all options are on the table," suggesting that Washington would consider military action.

North Korea accuses the United States of inciting the current nuclear tension as a pretext to invade the communist county.

The Koreas plan economic talks in Seoul this week and temporary reunions of separated family members next week. Civilian leaders from both countries will hold a festival in Seoul in early March to mark a popular uprising against Japanese colonial rule in 1919.