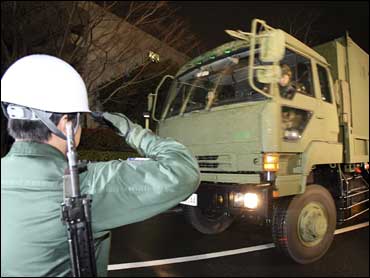 Japan's defense minister ordered the military to prepare to shoot down any debris that could fall on Japanese territory if a North Korean rocket launch fails, mobilizing interceptor missiles and sending two warships to the Sea of Japan.

North Korea has said it will launch a communications satellite April 4-8, and has warned that fragments from the launch could fall into waters off Akita and Iwate prefectures (states) in northern Japan. In response, Defense Minister Yasukazu Hamada told reporters he ordered the deployment of land-to-air and sea-to-air missile interceptors to the area at risk.

"We issued a destruction order," Hamada told reporters at parliament. "We will make sure to eliminate anything that may cause us any damage."

North Korea has mounted a rocket on a launch pad on its northeast coast, American intelligence officials say, putting Pyongyang well on track for a launch the U.S. and South Korea warned Thursday would be a major provocation with serious consequences.

Pyongyang says the rocket will carry a satellite, but regional powers suspect the North will use the launch to test the delivery technology for a long-range missile capable of striking Alaska. They have said the launch - banned by the U.N. Security Council in 2006 - would trigger sanctions.

U.S. Secretary of State Hillary Rodham Clinton warned such a "provocative act" could jeopardize the stalled talks on supplying North Korea with aid and other concessions in exchange for dismantling its nuclear program.

"We have made it very clear that the North Koreans pursue this pathway at a cost and with consequences to the six-party talks, which we would like to see revived," Clinton said Wednesday in Mexico City. (Read a full report on Clinton's remarks regarding North Korea.)

Japan has reacted the most strongly because the satellite will fly over its airspace and because North Korea has designated a zone near Japan's coast where debris is likely to fall.

North Korea has warned it will retaliate against any country attempting to intercept the satellite.

Under Friday's order, the Japanese military is allowed to shoot down any missile fragments and debris heading toward Japanese territory.

The military will also move some PAC-3 land-to-air missiles, currently deployed around Tokyo, to Japan's northern coast, and deploy a pair of destroyers carrying SM-3 sea-to-air missiles in nearby waters, the Defense Ministry said in a statement.

A set of the PAC-3 missiles would be also brought into central Tokyo to defend the nation's capital. The destroyers, equipped with Aegis radar, will sail from their southern homeport of Sasebo.

Chief Cabinet Secretary Takeo Kawamura called for calm and promised to inform the public as soon as North Korea launches the rocket, adding it's unlikely to fall on Japan's territory.

"We would like everyone to continue your daily life and business as usual," Kawamura said.

Some analysts said Japan - trying to appear strong in the face of the North Korean launch - is overreacting.

Hajime Izumi, a Shizuoka University professor of international politics, urged the government to be more balanced.

"The deployment is unavoidable as long as there is a slight possibility of a failure, but the problem is that it creates an impression that a launch would be a 100 percent failure," Izumi said. "The government should give a more balanced explanation."

Japan and its allies have said the launch could be an attempt to test long-range ballistic missile technology and have demanded the North cancel the plan or face additional sanctions. If Pyongyang forges ahead with the plan, they say, even the launch of a satellite would be in breach of a U.N. Security Council resolution barring the country from any ballistic activity.

Japan imposed tight trade sanctions on Pyongyang in 2006 after it tested ballistic missiles in waters dividing the two countries and conducted an atomic test. Japan's current sanctions, which have been extended every six months, are set to expire April 13.