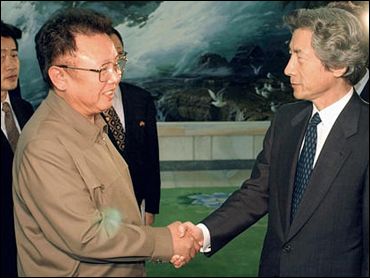 For Japan, the most important outcome of the meeting was Kim's admission that North Korea had indeed kidnapped 11 Japanese citizens during the late 1970s and 1980s, reports CBS News Correspondent Bruce Dunning.

Until now, North Korea had dismissed accusations of the kidnappings as "malicious lies." Now Japan has learned that seven of the kidnapped people are dead, and only four have survived.

No further information about the 11 has been released, but the admission clears the way for resuming talks on diplomatic ties between the two nations.

In an unusual act of contrition, Kim apologized and promised to prevent similar acts.

"It is regretful and I want to frankly apologize," a Japanese government official quoted Kim as saying, adding that the North Korean leader said he had punished those involved.

The apology, however, did little to ease the shock and pain for the families of the kidnapped and deceased.

"When I think of the families' feelings, there is nothing I can say," Koizumi told a news conference after meeting Kim. "My heart is filled with pain."

Koizumi could face a domestic backlash for agreeing to renew normalization talks so soon after the stunning announcement.

But the Japanese leader, who had put the kidnapping dispute at the top of his summit agenda, said improving ties would help ease tensions in one of the world's hottest flashpoints.

"Progress in Japan-North Korean ties does not just benefit the two countries," he told a news conference.

"It affects peace on the Korean peninsula and all of North Eastern Asia. It also contributes greatly to the peace and stability of South Korea, the United States, Russia, China, other neighboring nations and the international community as a whole."

Diplomats in capitals around the world had been watching the Pyongyang summit for clues as to whether Kim was really ready to lead his country out of its Cold War cocoon in return for aid for his tattered economy.

Pyongyang promised in a joint statement to extend its moratorium on missile tests beyond the current January 2003 deadline and to talk to countries concerned about its nuclear power program and its suspected development of nuclear weapons.

A 1994 U.S.-North Korean deal froze the North's suspected nuclear weapons program in exchange for two western-financed nuclear reactors and annual supplies of fuel oil. Under that agreement, Pyongyang undertook to allow in International Atomic Energy Agency (IAEA) inspectors, but has yet to do so.

An agreement by Iraq on Monday to let in U.N. weapons inspectors with no conditions had put pressure on North Korea to make a similar move.

It remained to be seen how Koizumi's high-risk diplomatic performance would play in Washington, which has dubbed Pyongyang part of an "axis of evil" with Iraq but is pondering whether to send its own senior envoy to resume discussions.

Koizumi said the North Korean leader had told him his door was always open for dialogue with the United States and asked the Japanese leader to convey that message to Washington.

Koizumi had been eager for a diplomatic coup to cement a recent rebound in his public support rate, and some analysts had feared he might make too many concessions in return for progress on the abductee issue and empty promises on other matters.

Kim, for his part, has been thought to be eager to convince the United States that Pyongyang does not deserve to be linked with Iraq. He also needs Japanese aid for his battered economy.

Instead, the two agreed to discuss Japanese aid for Pyongyang later. Tokyo gave South Korea $500 million when they normalized ties in 1965. Analysts have said Tokyo could provide up to $10 billion to the economically crippled North.

North Korea said it would help those abducted Japanese who were still alive to come home if they wanted.

That was no consolation for those whose loved ones had died.

"I am saddened. I cannot believe her death," said a tearful Shigeru Yokota, whose daughter Megumi went missing at the age of 13 in 1977.

Shigeru Ishiba, the head of a group of lawmakers who have supported the families, said: "It is an unforgivable act of barbarism. This is nothing but state terrorism."

Eleven people are officially on Tokyo's list of abductees, but intelligence sources have said nearly 40 Japanese may have been kidnapped, apparently to help train North Korean spies.

Kayoko Arimoto, mother of Keiko, who disappeared in 1983 in London when she was 23, also learned her daughter was dead.

"When I heard the news, I was so saddened, I could not even cry," she said.

Opposition Democratic Party leader Yukio Hatoyama lashed out at Koizumi for agreeing so promptly to resume normalization talks and for offering economic aid so soon after learning that six of the abductees were dead.

That revelation could well dampen the Japanese public's enthusiasm for Koizumi's achievements.

"Koizumi may have earned points for making North Korea admit to the abductions, but the general public will not be in a mood to cooperate fully with North Korea," said Tatsuo Otani, a 33-year-old banker.

"I think the regular person would think, 'Gosh, six are dead. What an awful country.'"