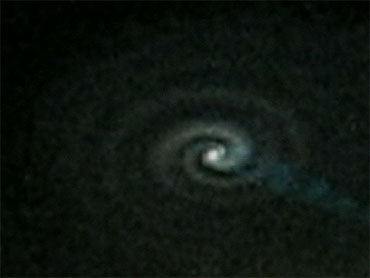 A light appearing high in the Arctic sky early Wednesday morning baffled many people who saw it, and sparked lots of comments.

Just before dawn, the small blue light appeared over Norway. Small at first, the light grew into a spiral, then disappeared into what appeared to be a black hole.

In the northern community of Trondelag and on a Norwegian military base, cell phones snapped, video cameras rolled and bloggers got busy.

CBS News correspondent Sheila McVicar pointed out the Arctic sky is no stranger to atmospheric phenomena. The northern lights and the seasonal flight of Santa are just two, McVicar said.

However, this phenomenon apparently lies across the border with the Russian military and another failed missile launch, McVicar said, noting that a respected Russian daily newspaper reported that the third stage of a sophisticated Bulava intercontinental missile had failed. And Thursday, the Russian Defense Ministry reported that a test launch of a Bulava missile from a submarine in the White Sea had failed.

Space experts point to the spiraling of this missile as it malfunctioned as an explanation for the shape seen over Norway. The halo, experts claim, was produced by missile fuel, McVicar said.

"Rockets can fail in spectacular ways," he said. "And when you look at vehicles up out of the atmosphere, where there's no pressure constraining those contrails, it gets dramatic."

Harwood said the Norwegian light looks like a failed mission off Cape Canaveral in 1989.

"As soon as the missile came out of the water, the nozzle went hard over and the rocket just started spinning end over end," he said. "... This video looks very similar to that and that would certainly be my assumption as to what went wrong."

The failure is embarrassing for Russia, McVicar remarked. Of 12 known tests, she said at least seven have been unsuccessful. McVicar added the Bulava, a high-tech new generation weapon capable of carrying warheads up to 5,000 miles, may be on the verge of being scrapped.

To see the spiral, click on the video below: