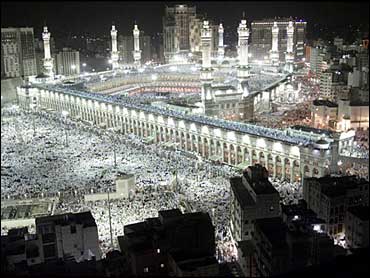 About 2 million Muslim pilgrims traveled by car, bus and foot to the tent city of Mina on Sunday to spend the night before heading to nearby Mount Arafat at dawn for the climax of the annual hajj.

This year's pilgrimage is taking place under tight security amid fears of demonstrations against any U.S.-led war in neighboring Iraq to topple President Saddam Hussein.

Saudi authorities erected 44,000 tents to host the pilgrims who left the holy city of Mecca earlier Sunday after performing the first hajj rituals by circling the Kaaba, the large cubic stone structure that Muslims face during their five daily prayers.

Tens of thousands of elderly pilgrims and people assisting them have already begun arriving at Mount Arafat, skipping the stay in Mina to avoid the difficulties caused by the masses of pilgrims converging on the gentle hill located some 12 miles southwest of Mecca.

Praying at Mount Arafat is the main ritual of the five-day pilgrimage. The time Muslims spend praying there is believed to symbolize Judgment Day, when Islam says every person will stand before God and answer for his deeds.

"These are moments when we feel the sense belonging to Islam and we know the true meaning of our lives," said first-time pilgrim Essam Khalifa, 26, from Libya, who arrived at Mount Arafat ahead of the more than 1.5 million people expected to arrive Monday.

Muhammad, Islam's prophet, delivered his last sermon at Mount Arafat in March of 632, three months before he died. Muslims believe that during this sermon, the last passage of their holy book, the Quran, was revealed to Muhammad.

A heavy police presence was out in force at Arafat, with patrol vehicles and helicopters keeping watch over streets and prayer areas, while security personnel manned road blocks ahead of the arrival of pilgrims.

According to Islamic belief, worshipping at Islam's holiest shrines in Saudi Arabia are most likely to be answered by God. "I prayed for myself, my family, my friends and for all those who asked me to pray for them," Mahmoud al-Gammal, an Egyptian, said.

Many pilgrims also asked God to support the predominantly Muslim Palestinians in their ongoing conflict against Israel and to avert a possible U.S.-led attack on Iraq, another Muslim state.

"We prayed for Muslims to be triumphant and for the infidels to be humiliated," Tolba said. "We hope God answers our prayers."

The United States and Israel have been decried throughout the Islamic and Arab worlds as infidels. Osama bin Laden, the Saudi-born leader of the al Qaeda terror network, vowed to rid U.S. soldiers from Saudi Arabia, saying their presence desecrated the birthplace of Islam.

From Mount Arafat, the pilgrims will move to nearby Muzdalifah, where they collect pebbles to stone three pillars symbolizing the temptations of the devil.

Then, pilgrims to Saudi Arabia and Muslims around the world celebrate the start of Eid al-Adha, or the feast of sacrifice, by slaughtering a camel, cow or sheep and sharing the meat with the poor.

According to Islamic teachings, the hajj is a spiritual journey that cleanses the soul and wins absolution. According to tradition, a Muslim who performs the Hajj washes away his sins and returns to his home as free of sin as a newborn.